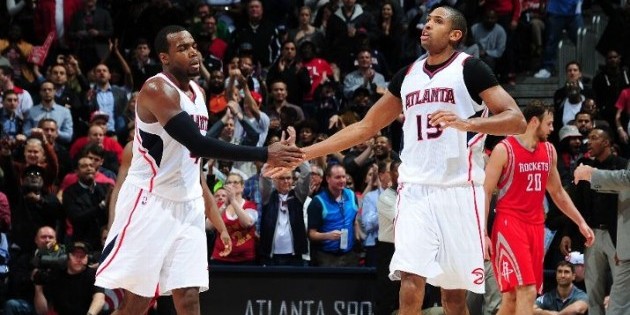 “It’s a credit to our guys,” Horford said. “Guys were relentless, kept fighting. The biggest thing for us was we really locked in on defense. That put us in position to win the game.”

Jeff Teague scored 25 points, Horford added 18, and the NBA-leading Atlanta Hawks rallied from an 18-point deficit to win their fifth straight game 104-96 over the Houston Rockets on Tuesday.

James Harden, the league’s leading scorer, was serving a one-game suspension and did not play for Houston, but the Rockets led for the most of the game, until Teague’s 3-pointer with 4:24 remaining put Atlanta up 91-90.

Houston forced a few ties in the closing minutes but never regained the lead.

Jason Terry finished with 21 points in a reserve role, and starting forward Terrence Jones had 18 points for Houston, which was attempting to match a season-long streak with a sixth straight victory.

The Rockets led by 18 late in the second quarter and were up nine to begin the fourth, but they unraveled after Paul Millsap blocked Corey Brewer’s layup attempt and Teague hit his big 3 from the left wing to bring the capacity crowd to its feet.

Josh Smith and Donatas Motiejunas each scored 14 points for the Rockets, who had won their past three games by five points or fewer.

Millsap had 16 points and a game-high 14 rebounds. DeMarre Carroll hit a critical, late 3 and finished with 11 points.

Brewer started for the first time in 34 games with Houston. He scored eight points and went just 4-for-14 from the field in place of Harden.

Harden is expected back in the lineup Wednesday, when Houston hosts Southwest Division rival Memphis. He was not with the team while serving his suspension for kicking four-time MVP LeBron James in the groin during Sunday’s overtime win over Cleveland.

Trailing 59-45 at halftime, Atlanta cut the lead to seven on Millsap’s fast-break layup. But the Rockets were too quick with their feet for the first three-and-a-half quarters, as they stepped in Atlanta’s passing lanes and contested nearly every shot.

Houston jumped out to a 14-point lead late in the first on Brewer’s fast-break dunk on an alley-oop feed from Smith.

Atlanta pulled within two early in the second on Horford’s 20-footer, but the Hawks closed the period by missing 12 of 14 field-goal attempts and trailed by 18 at the 1:44 mark on Jones’ free throw.

“It was frustrating,” Millsap said. “It seemed like they made every right play. It was tough. They moved the ball. They shared the ball well in the first half. They caught us off guard a little bit.”

JOSH NOT FEELING THE LOVE ANYMORE IN ATLANTA

Fans booed Smith, who grew up in nearby Powder Springs and played his first nine seasons with the Hawks, nearly every time he touched the ball. The jeers were particularly hard after Smith twice hit a 3-pointer, then held both arms up and put an index finger to his lips to hush his detractors late in the third and early in the fourth quarters. Considered a talented underachiever during his stay in Atlanta and later in Detroit, Smith missed a straightaway 3 later in the fourth, committed an offensive foul, left the game with 3:10 remaining and didn’t return.

Smith was disappointed to get booed after “all I’ve been doing was positive things in the community and with the basketball team. I mean those fans are fickle, very fickle. And you know, bandwagoners, so it really doesn’t mean anything to me.”