Home /Latest News/Seminoles > Despite Shooting of Rathan-Mayes, Miami Holds on for Win
Share with friends 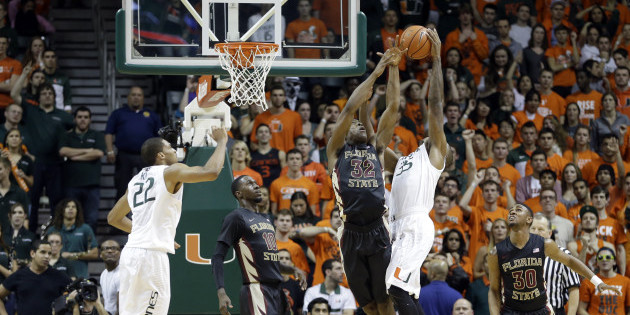 CORAL GABLES — With his team desperate for baskets, Xavier Rathan-Mayes couldn’t miss. He scored 30 points in the final 4:38, and even that wasn’t enough to beat the Miami Hurricanes.

Miami built an 18-point lead and survived the late heroics by Florida State’s freshman guard to win 81-77 on Wednesday.

Rathan-Mayes scored 26 consecutive Florida State points without missing a shot. He went 8-for-10 in the final five minutes, sinking six 3-pointers, and finished with 35 points to tie his career high.

“I’ve never seen that before in my college coaching career,” said Miami’s Jim Larranaga, who has coached 934 games. “Outrageous. One of the greatest on-court performances I’ve ever seen.”

The Hurricanes made 14 of 16 free throws in the final 2:51 to hang on to their lead. Davon Reed’s two free throws with two seconds left sealed the victory and left Rathan-Mayes looking glum despite his performance.

“We did a great job of coming back,” he said. “But at the end of the day, it was just too big of a hole to overcome.”

The Hurricanes (18-10, 8-7 Atlantic Coast Conference) won for the third time in the past four games and avenged a one-point loss earlier this month at Florida State (15-14, 7-9).

Rathan-Mayes’ streak included five 3-pointers in a span of 2:35.

“I’ve never really been in a game where the player just starts hitting 3 after 3 after 3,” Miami’s Angel Rodriguez said. “It was kind of frustrating.”

Rathan-Mayes’ confidence seemed to grow with each shot he made.

“It’s tough to describe,” he said. “You’re in an arena, but everything is quiet. My teammates kept giving me confidence, and I wanted to do everything I could to help us win the game.”

“That was a tremendous effort on his part,” coach Leonard Hamilton said. “But as a team, we should have not have been in a situation where he had to get 30 points in five minutes. We were very inept at defending them.”

Rodriguez scored 25 points for the Hurricanes, who shot 56 percent in the second half. He began the night shooting 28 percent in league games but shot 8-for-14 and said a conversation with a psychologist helped him regain his confidence.

“I didn’t give up on myself,” he said. “I had a great conversation with a new friend I just met.”

Larranaga recommended the doctor and has turned to him in the past.

“He is just a miracle worker when it comes to getting people to think correctly,” Larranaga said.

Sheldon McClellan scored 19 points and Reed 18 for Miami. Tonye Jekiri had 12 points and 11 rebounds for his ninth double-double of the season.

The Hurricanes missed their first seven 3-point attempts before Reed sank a 3 to start a 9-0 run for a 27-20 lead late in the first half. They never trailed again.