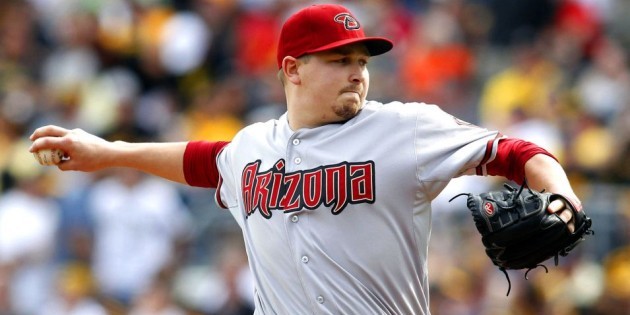 Earlier in the day, sources told FOX Sports MLB Insider Ken Rosenthal that other teams were interested in Cahill, but the Braves apparently came up with the best offer — shipping outfielder/catcher prospect Josh Elander to Arizona.

There are a million ways, figuratively speaking, of course, to interpret the Braves’ acquisition:

Maybe Cahill’s a necessary starting option, as a means of replacing an ailing Mike Minor (shoulder), or simply being a placeholder for Mike Foltynewicz, one of Atlanta’s top prospects (snagged in the Evan Gattis trade with Houston).

Perhaps Cahill (15 relief appearances last year) will serve as another veteran in the bullpen, which has plenty of power arms … but may lack a noteworthy hurler for long-relief or situational purposes.

Or maybe, just maybe, the Braves’ personnel staff — led by new president of operations John Hart — believes the 27-year-old Cahill (a second-round draft pick in 2006) has plenty of time to recapture his out-of-the-blocks goodness with the Athletics, just five short years ago.

It’s worth nothing: In the majors, Cahill has 64 career victories, a 4.07 ERA and middling strikeout-to-walk rate of 718/411. To stick with the pitching-rich Braves, Cahill would surely have to perform beyond those averages.