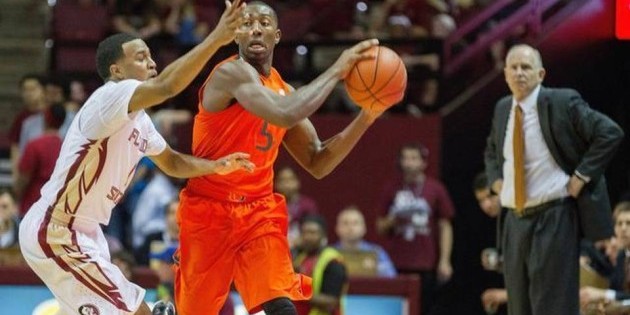 So Montay Brandon saw it as an opportunity. The junior had one of his best games of the season, scoring 18 points on 7-of-7 shooting, and Florida State rallied from a 16-point first-half deficit to beat No. 23 Miami 55-54 on Sunday.

The Hurricanes’ Sheldon McClellan missed a floater in the lane as time expired.

Brandon had three steals, including two early in the second half, to help Florida State come back.

“We had to create some offense from our defense,” coach Leonard Hamilton said. “His experience told him that somebody had to make some plays. He made several defensive plays that gave us an emotional lift. I thought that really, really sparked us.”

Florida State (12-10, 4-5 Atlantic Coast Conference) won despite three of its starters struggling from the floor. Rathan-Mayes had five points, while Bookert and Phil Cofer were scoreless. The trio combined to shoot just 2 of 14.

Brandon had 12 second-half points and Kiel Turpin added six of his 10 after halftime for the Seminoles, who shot 53.7 percent. Turpin put Florida State ahead for good with a baby hook with 1:41 left.

Miami had a few chances late. Davon Reed misfired on a jumper with 1:08 to go, and McClellan was off on the potential game-winning shot.

“Florida State defended us very, very well in the second half,” coach Jim Larranaga said. “You have to give them credit. Their defense throughout the second half made us miss shots.”

The Seminoles won despite committing 16 turnovers. But they had only five in the second half.

Rathan-Mayes’ 3-pointer at the end of the half pulled the Seminoles within 11.

Brandon sparked the second-half comeback with a steal and a dunk, a 3-pointer and another steal and dunk to cut Miami’s lead to 38-34 with 17:02 to go.

“Brandon stole it twice and dunked it twice,” Larranaga said. “That fired them up. All of a sudden the lead evaporated right away.”

Florida State had lost four of five before bouncing back with an 82-76 win over Wake Forest, rallying from 15 points down for the double-overtime victory Wednesday. Now the Seminoles have won back-to-back games after double-digit comebacks.

“It gives us momentum,” Brandon said. “But we know we have tough games ahead.”