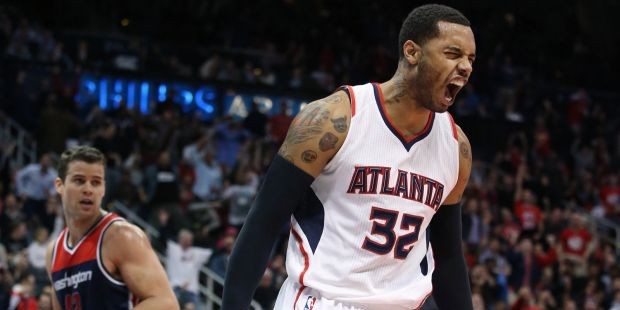 Jeff Teague made sure they got back on track.

Teague held his own in an electrifying duel with John Wall, scoring 26 points and dishing out eight assists as the Hawks bounced back from their first loss in more than a month with a 105-96 victory over the Washington Wizards on Wednesday night.

Al Horford added 21 points and 13 rebounds, helping the East-leading Hawks pull away in the fourth quarter.

Atlanta (41-9) was coming off a 115-100 loss at New Orleans that snapped their franchise-record, 19-game winning streak. They overcame a dismal third quarter to beat the Wizards for the third straight time this season.

“It’s big to get a win, get back on the winning track,” Teague said. “We had a tough loss in New Orleans.”

Teague finished off the Wizards with a drive to the basket, laying the ball in despite getting bounced to the floor by Marcin Gortat. Teague sank the free throw to complete the three-point play, giving Atlanta a 103-92 lead with 1:54 remaining.

“You can’t have those spurts where bad play on our part puts us back in a hole after we dig ourselves out of it,” Wizards coach Randy Wittman said.

“That was a heck of a matchup at point guard,” Atlanta coach Mike Budenholzer said.

As usual, the Hawks had plenty of players chipping in, with DeMarre Carroll scoring 14, Paul Millsap 11 and Dennis Schroder 10 off the bench. That was only appropriate on an evening when the NBA announced a first: all five Atlanta starters (Teague, Horford, Millsap, Carroll and Kyle Korver) were named players of the month for January after teaming up to lead the Hawks to a 17-0 record.

The players weren’t aware of the honor until after the game.

The Hawks knocked down seven 3-pointers in the opening quarter, building a 29-18 lead. They stretched the margin as high as 16 and led 59-46 at halftime, but the Wizards dominated the third quarter.

Atlanta endured a miserable stretch, missing eight of nine shots from the field and four of six free throws, in addition to turning it over twice. The Wizards took advantage, surging ahead for the first time since the opening minutes, 74-73, on Wall’s two free throws with 1:17 left in the third.

The Hawks hit the final two baskets of the quarter, reclaiming a 77-74 lead heading to the final period.

“We felt this is a game that could really give us momentum,” Washington’s Paul Pierce said. “We got back in it in the third. We just couldn’t keep it up.”