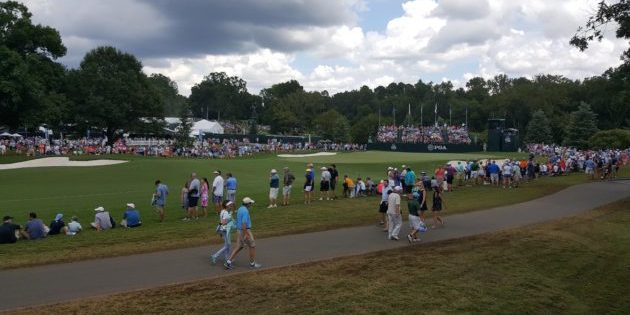 CHARLOTTE — A strong finish by Justin Thomas highlighted a memorable PGA Championship hosted by the Quail Hollow Club in Charlotte on Sunday.

Players overcame stifling heat and humidity, in addition to tough, close competition to reach, for what would be for most of the challengers on Sunday, their first major championship.  For Thomas, a former University of Alabama golfer and close friend of pre-tournament favorite and 2017 Open Championship winner Jordan Spieth, he not only captured his first major championship and the $1.8 million check, but sees himself vault up to second in the FedEx Cup Point standings.

The day started with a final pairing of former University of Georgia golfer Kevin Kisner and Chris Stroud. However, as the leaderboard moved constantly all afternoon, at one point, 5 different players shared the lead at the same time.

It was Thomas who mastered the back nine, getting a massive birdie on the 17th hole to give himself a 3-shot cushion before teeing off on 18.  After Japanese star Hideki Matsuyama faltered late with 3 straight bogies, only Kisner had a chance to catch Thomas.  Once his approach shot on 18 went left into the creek that guards the left side of the fairway, it was all over. Kisner posted a final round of 74.

The field saw many of the “young guns” of today’s PGA TOUR advance to challenge on Sunday.  Rickie Fowler made a late charge, posting a 67 and moving to 5-under par.  Italy’s Francesco Molinari also made a late charge, finishing in a tie for second with American Patrick Reed and South African Louis Oosthuizen.

It was Thomas who shined the most when it counted.  It was also fitting that the son and grandson of PGA club professionals would win the tournament hosted by the PGA, the organization of club pros.

Quail Hollow did a good job of hosting the tournament, with massive crowds on hand.  On Saturday, fans 3-5 deep along entire fairways strained for a view of the action.  This, in spite of showers and oppressive heat and humidity. The club proved to be a better challenge than many expected, taking out the so-called “bombers”, or long hitters, through the course’s deep Bermuda rough and very challenging greens that were lightning quick before showers slowed them down, if only for a bit.