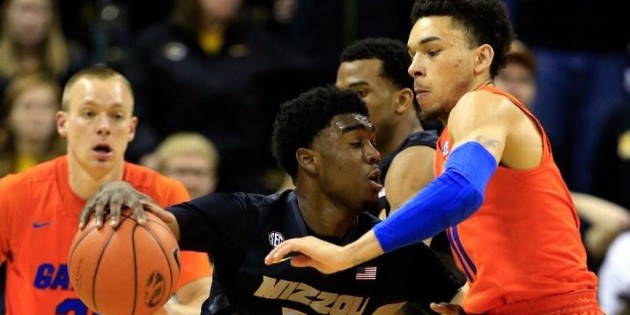 It came in the form of Namon Wright, who scored a career-high 28 points on 10-of-13 shooting to lead the Tigers past Florida 64-52 on Tuesday. The win snapped the school’s record 13-game streak with a flourish.

“I was questioning whether he was going to miss tonight,” teammate Montaque Gill-Caesar said.

The freshman from Los Angeles carried the team nearly single-handedly in the opening minutes of each half, and his 6-of-8 performance from behind the 3-point line helped spark the loudest cheers in Mizzou Arena since the Tigers (8-20, 2-13 Southeastern Conference) last won on Jan. 8.

“We didn’t really have anybody who could stop him,” Gators coach Billy Donovan said.

Devin Robinson scored 14 points and Jon Horford added 10 for Florida (13-15, 6-9), which lost for the sixth time in seven games and prevented Donovan from earning his 500th career win. He would have joined Bob Knight as the only coaches in Division I history to reach the milestone before reaching their 50th birthday.

Missouri senior Keith Shamburger criticized the team’s effort after losing 76-53 at Vanderbilt on Saturday, saying slow starts are getting into the Tigers’ heads. Missouri missed six of its first seven shots in that game, but started 4 of 6 Tuesday thanks mostly to Wright.

Wright scored seven points in the first 4:27, providing a boost of energy that lasted through most of the opening half. The Tigers led for more than 13 of the game’s first 20 minutes, only to watch Florida take a 31-27 halftime lead after the Gators scored six of the final eight points.

Wright reignited after the break, pulling fans to their feet by scoring Missouri’s first 10 points in the first 3:43 to gain a 37-35 advantage. The Gators answered with nine unanswered points before Missouri countered with 11 of the next 12 for a 48-45 lead.

Florida narrowed its deficit to a single point on an ensuing jump shot from Chris Walker, but could get no closer during the final six minutes.
“I thought we really made a lot of poor choices, things that to be quite honest, left me scratching my head,” Donovan said.

The Tigers gradually stretched their lead to as many as 14 points to the delight of the 7,631 in attendance, most of whom remained standing during the last few minutes. As the final seconds ticked off, the student section started performing Florida’s “Gator Chomp” before joining other fans in sustained applause as the clock struck zero.