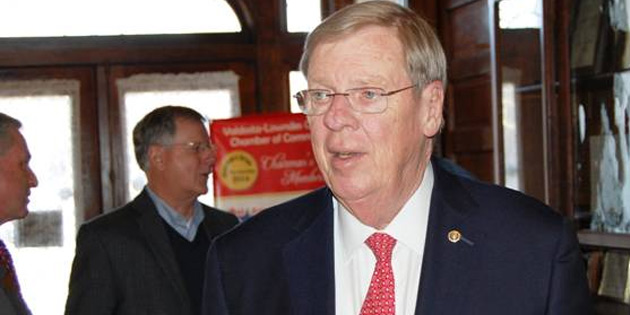 WASHINGTON — Sen. Johnny Isakson, R-Ga., revealed Wednesday that he has Parkinson’s disease but said he’s still running for re-election in 2016.

“I am in the early stages of the disease, and my main symptoms are the stiffness in my left arm and a slowed, shuffling gait,” Isakson said in a written statement. Parkinson’s is a degenerative disorder whose patients suffer from tremors and loss of muscle function.

Isakson insisted that it hasn’t hurt his ability to do his job in the Senate, including chairing the Senate Committee on Veterans Affairs and the Select Committee on Ethics.

“I remain devoted to public service, to my state and to my constituents. I am eager to take my record of results to the voters of Georgia as I run for re-election in 2016,” Isakson said.

The senator released a letter from his neurologist, Thomas Holmes of Marietta, Ga., who wrote that he diagnosed Isakson with Parkinson’s disease in August 2013.

Holmes wrote that Isakson has been taking medication and doing physical therapy. He wrote that he last examined Isakson on May 27 and found he has mild symptoms, at stage 1.5 of the five-stage disease.

“Today’s news does not change that. If anything, it will embolden him,” Wicker said.

Senate Minority Leader Harry Reid, D-Nev., also praised Isakson, saying he “has represented the people of Georgia with distinction and honor in the Senate.”

“Today’s announcement has shown his tremendous courage in his fight against Parkinson’s and his resolute determination to not let it take control of him,” Reid said in a written statement.

No Democrat has stepped forward to challenge Isakson for his Senate seat, and the only Republican challenger so far is minister and engineer Derrick Grayson, who received just 1 percent of the vote in the GOP primary when he ran for the U.S. Senate last year.

Isakson said he struggled with whether to make his disease public.

“I recently shared the news with my three grown children and my senior staff a couple of months ago,” he said. “Their support, along with the steadfast support of my wife, Dianne, helped me to take this step today.”