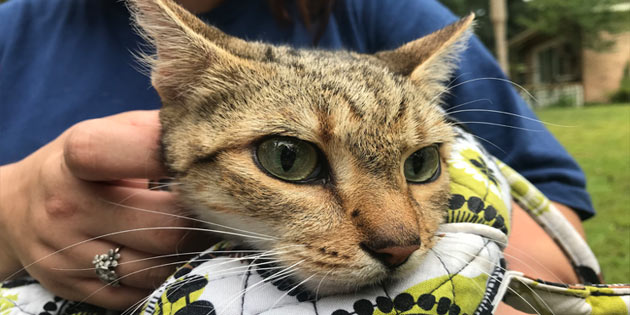 Valdosta – Brandi Loucks had a tearful reunion Monday afternoon with her cat Gypsy.

Gypsy had been in a tree for almost a week when Voigt’s Crane Rental came to the rescue.

On the morning of Oct. 3, Loucks said that Gypsy ran out the door as she headed to work and, when Gypsy hadn’t returned by that evening, Loucks began to worry.

“She’s an indoor cat for the most part and will come outside to hang out or use the bathroom,” Loucks said.

While out searching, Loucks shined a flashlight up in a neighbor’s tree and saw the reflection of Gypsy’s eyes.

“She’s not a climber so something must have scared her up there,” Loucks said.

Loucks began calling various services around town to no avail.

Although Colquitt EMC did attempt to rescue Gypsy, the company’s 70 foot ladder was not tall enough and Gypsy remained stuck 90 feet in the air for days.

Finally, on Monday afternoon, Loucks got in touch with Voigt’s Crane Rental who agreed to tackle the task.

“Nobody else could do it, so we thought we’d help,” said Kenny Voigt.

Voigt, Joe Charron and Gene Nix arrived on the scene and, as Nix operated the crane, Voigt and Charron were lifted to Gypsy’s location, safely placing her in a bag.

Although scared, Gypsy appeared unharmed from the incident.

“I am so thankful and grateful,” Loucks said as she hugged each of the men.