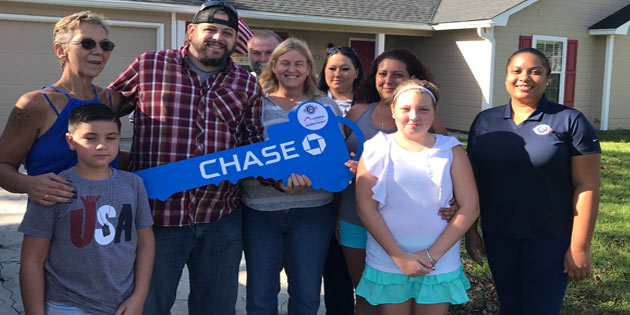 Operation Homefront created its Homes on the Homefront program to award mortgage-free homes to veterans and military families with the help of corporate sponsors. Houses are donated by bank partners with this particular home provided by JPMorgan Chase & Co.

Hampe was in the Air Force Security Forces for almost eight years and is currently employed by the U.S. Post Office. He was deployed to Iraq four times during his service.

He originally learned about the Operation Homefront program through a friend but kept putting off sending in an application.

“I didn’t serve for recognition. I joined in 2002 with 9/11 playing a big part in my decision,” Hampe said. “I thought there were more deserving people (for this home). I didn’t expect it to be me.”

Applications are completed online for the houses and applicants are narrowed down based on income, need and background and credit checks, according to Operation Homefront HOTH Caseworker Andrea Alvarez.

“It is a two year process,” Alvarez said. “We will still own the house for two years, after which time the house is deeded to him, mortgage free.”

Hampe, who will share the house with his mother Diane Hampe, said that this house will allow him to be closer to his son and VA facilities.

“I wish everybody could get something like this,” Hampe said. “It’s an amazing feeling.”