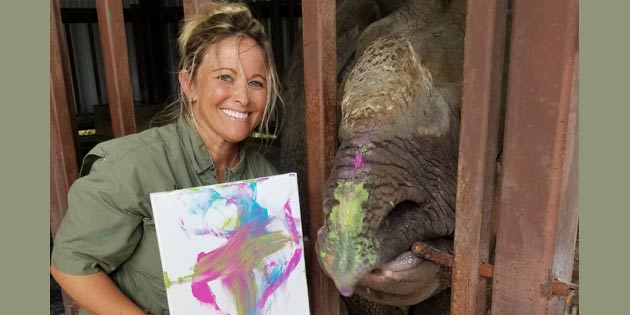 Mixed in with all the excitement at Wild Adventures this weekend, is a bit of serious business. In honor of World Rhino Day, Wild Adventures is raising money and awareness for the International Rhino Fund by raffling off paintings created by the park’s resident artist–Graham the rhino.
“World Rhino Day is important because it gives a chance to spread awareness about why rhinos are endangered and what people can do to get involved in helping with conservation,” said Lisa Henderson, Graham’s primary caregiver. “Graham is an educational ambassador, and he gets their hearts involved.”

How do you get a 5,000 rhino to paint a picture? According to Henderson, it involves much positive attention and reinforcement. And, of course, treats. Graham has been at the park since 2011 and she has been his primary caregiver. He is an 18 yr old Greater One-Horned Rhino, also known as an Indian Rhino, one of the five species of rhinos. 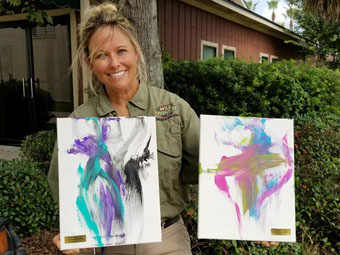 Graham is no stranger to raising awareness for rhino conservation. In addition to his artistry, he has also made two appearances in the Rhino Conservation Calendar.
Graham’s two paintings will be raffled off Saturday at the park. Guests can purchase tickets for $1 each and all proceeds will go to the International Rhino Fund.
Additionally, the park will be hosting Cars & Coasters, a car and motorcycle show and competition. This weekend is also the opening weekend for the park’s Halloween fun, with Terror In the Wild on Friday and Saturday night, and Kid-O-Ween activities during the day on Saturday and Sunday. See wildadventures.com for more details.
TAGS: eventpaintingrhinowild adventuresworld