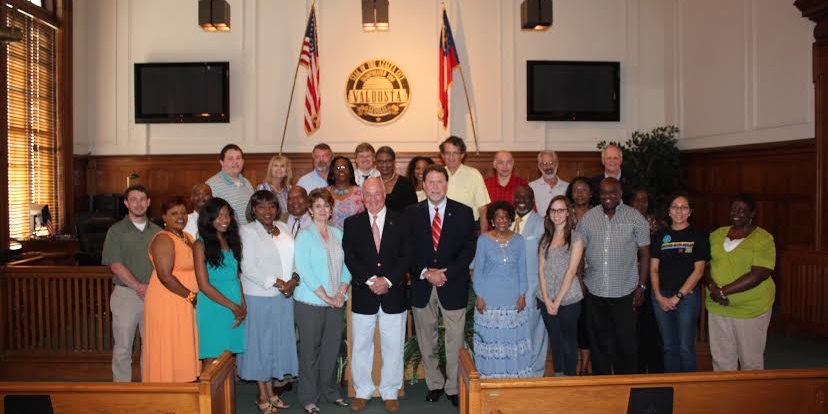 VALDOSTA — Twenty-six local citizens graduated from the 6th annual Valdosta Government 101 Citizens Orientation, at a ceremony on May 11. The six-week program, an initiative of the Valdosta Mayor and City Council, attracted one high school student and her mother, a few married couples and college students, educators, bankers, clergy and citizens from other walks of life who wanted to learn more about the programs and services of their city government.

“It’s really astonishing to see what the city is able to accomplish with its limited resources,” said Thressea Boyd, local communications professional. “Valdosta 101 opened my eyes to how many people actually work in the city and how many resources it takes to provide quality services for our daily lives. I feel all citizens should complete the program to get a better understanding of how city government works in general.”

The Valdosta Government 101 Citizens Orientation is one of three volunteer programs in the City of Valdosta available to citizens—the other two are the Citizens Police Academy and Citizens Fire Academy—designed to give citizens valuable knowledge of resources through a behind-the-scenes view inside local government. A number of graduates of these programs have utilized their experience and knowledge gained to pursue public service opportunities, such as serving on local boards and commissions and other public offices.

“The knowledge and understanding that I gained from completing this orientation has solidified for me that I need to be more involved with my local government,” said Franchesca Griffin, who has since been appointed by the Valdosta City Council to both the Keep Lowndes Beautiful Board and the Valdosta-Lowndes County Housing Board of Adjustments & Appeals. “The work of local government is bigger than most people imagine. It takes the work of many hands. I want to make a difference in my community and play my part in making Valdosta a great place for all people.”