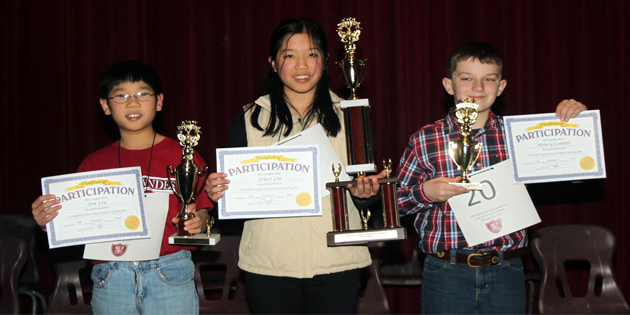 When used as a noun, repeat means “an action, event or other thing that occurs or is done again.”  That is what happened on Friday, February 13, at the Lowndes County School System’s Annual Spelling Bee.  After close to 3 hours of intense spelling, Siblings Joyce and Jon Lui earned the first and second place trophies – in the same rankings as last year’s spell-off.  Third place honors went to Henry Corbitt of Moulton-Branch Elementary.

Beginning with 20 students representing all Lowndes County elementary and middle schools, the annual spelling bee progressed through 284 words to eliminate all but the top 2 contestants – Joyce and Jon Lui.  The sister and brother continued through all 375 words on the list with no misses from either contestant.  In a historical moment for the system, the judges were faced with a dilemma on how to proceed!  They went to the dictionary and chose twenty words for the two contestants to choose by pulling numbers.  After several rounds, fifth grader Jon missed the word “synonymous,” leaving his sister an opportunity to claim the system title for the second year.  Eighth-grader Joyce spelled “naiveté” correctly and then won by spelling the word “quiescent.”  She will advance to the district spelling bee.