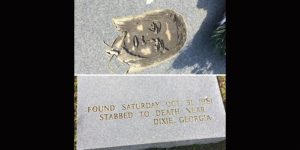 She was murdered and tossed on the side of the road. She hasn’t been identified and not many people have even heard of her case.

“I just wanted to take this time to shed a tiny bit of light on this case and to help her not be forgotten,” remarked Kelly Sage, who lives in Quitman and snapped a photo of her grave recently. “I feel nobody deserves to remain nameless and left behind by time.”

In the Quitman Free Press article dated November 4, 1981, the headline read, “Stabbing Victim’s Body Found by Road Near Dixie,” and detailed how law enforcement were in a quandary regarding the woman’s identity. She was found just off the Dixie-Barwick Highway on a Halloween Saturday afternoon. Sheriff Hiram Bembry said no arrests were made and the only possible lead was a Winebago with Alabama license plates seen parked near where the body was found.

The unidentified woman was white, between the ages of 18-25. Her body was sent to the GBI Crime Lab in Moultrie and then to Maxwell Funeral Home in Quitman. Her description was 5’2″, weighing a scant 100 pounds, with dark brown hair and green eyes, wearing blue jeans and a pullover T-shit. Sheriff Bembry said the woman was fingerprinted and was hopeful her identity would be revealed.

On November 11, 1981, there was promise. A woman and her daughter had come to Quitman from Liberty, Kentucky, searching for her  granddaughter. After looking at the body in Quitman, she verified it was not her granddaughter.

The victim had been stabbed in the abdomen. A van seen where the body was found was determined to have been driven by an escapee from a Kentucky lock-up. He was arrested and charged with possession of a stolen vehicle and other charges. The Quitman Jane Doe, however, was buried in the Oak Hill Cemetery – her identity and murderer never known.

Those from the area who heard about the case were transfixed.

The story was on the news and they ran her picture in papers. The funeral home was open daily for people to come view her hoping to identify her. A local man paid for her burial and headstone.