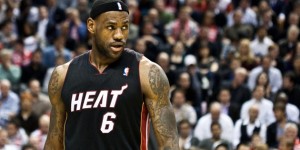 After setting an NBA Finals record for the most 3-pointers ever hit in a playoff season, the Spurs’ Danny Green picked a whale of a time to go ice cold. After lighting up the scoreboard in the first 5 games of the series, Green struggled in Game 6…only to come out and shoot 1-12 in a deciding Game 7.

Opposite Green, the Heat’s LeBron James put on a performance for the ages in Game 7, scoring 37 points and grabbing 12 rebounds. Dwyane Wade added 23 points for Miami, but the unsung hero of the night was journeyman Shane Battier. The 34-year old veteran scored a season-high 18 points in the win on 6-8 shooting.

Despite four starters in double figures, the San Antonio bench (and Danny Green) combined to shoot just 6-23 (17 points) from the field. The win gives the Heat back-to-back NBA titles.