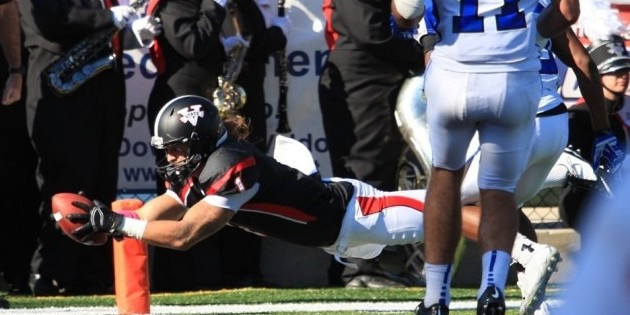 With the victory, Valdosta State, which won its third straight game, improved to 5-2 overall and 3-2 in GSC play while Shorter fell to 3-4 and 1-3 in league action.

Each team kicked a field goal on its first possession of the game before Valdosta State took control of the contest with 24 straight points. Kenny Langford opened the scoring with a 42-yard attempt for the Hawks, but Pistelli answered with a 33-yard try for VSU as the first quarter ended with the score knotted at 3-3.

Neither team scored over the first eight minutes of the second quarter before Valdosta State marched 68 yards on 10 plays for a touchdown. Austin Scott gained 18 yards on a carry on the first play of the drive before Medlock hooked up with Chris Anderson for two more yards. The Blazers took to the ground after that as Cedric O’Neal carried the ball four straight plays for 39 yards to move the ball to the SU 10. On the ensuing play, Medlock found a wide open Scott Crawford, a converted offensive lineman now playing tight end for VSU, for the sophomore’s first career catch, a 10-yard touchdown strike that put VSU in front 10-3 with 6:20 to go in the first half.

After SU turned the ball over on downs on the VSU 29 on the ensuing drive, Valdosta State used its two-minute offense to add another touchdown just before the half. After taking the ball over with 2:02 remaining in the first half, Medlock completed a 20-yard pass to Roshmel Young and ran for nine yards before completing a seven-yard pass to Anthony Ingram. Medlock remained perfect on the drive as he completed his next five passes, the last coming on a 16-yard scoring strike to Shane Henderson with 24 seconds remaining in the half that posted the Blazers to a 17-3 halftime lead.

The Blazers used a deep pass on the first drive of the second half to push its advantage to 24-7 as Medlock found Donovan Bolden on a 54-yard scoring strike while, after a SU fumble gave the ball back to the Blazers, Pistelli added a 40-yard field goal with 11:55 remaining in the third quarter to push the VSU advantage to 20 points.

Langford added a 29-yard field goal for Shorter five minutes later, but Henderson and Medlock again hooked up for a touchdown, this one a four-yard completion, while Pistelli closed out the game’s scoring with a 42-yard field goal.

Valdosta State tallied 446 yards of total offense in the game as it ran for 247 and passed for 199. Medlock completed 18-of-26 passes in the contest and ran for 40 yards while O’Neal recorded his second straight, and 12th career, game with 100 yards as he finished with 125. Meanwhile, nine different Blazers caught a pass in the game.

The Valdosta State defense ran its streak of quarters without allowing a touchdown to 12 straight as it surrendered 308 total yards to Shorter. The last touchdown scored against VSU came with 5:28 to go in the fourth quarter of the Blazers’ game against North Alabama on September 27. Over the last three games, Valdosta State has out-scored its opponents 143-12.

Shorter was led by Eric Dodson offensively as the quarterback ran for 84 yards while passing for 78. The Hawks had 230 rushing yards in the game while Jordan Shaw had a team-high 10 tackles.

Valdosta State returns to action Thursday, October 30 when it travels to Livingston, Ala. to face West Alabama. The game, which is slated for a 7:00 p.m. Eastern kickoff, will be the Florida Space Coast GSC TV Game of the Week and will be broadcast live on ESPN3.