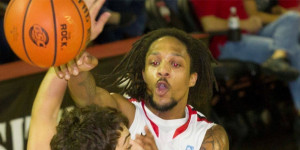 The Argonauts held a 22-6 advantage in offensive rebounds in the game, which led to a 25-7 UWF advantage in second chance points.

The game was tight through the opening 10 minutes, which featured three ties and three lead changes while neither team led by more than five points. Valdosta State (13-9, 7-9) claimed its largest lead of the span with a Jeremy McKay jumper that put the Blazers up 7-2 just over two minutes into the contest, only to have West Florida (4-17, 3-12) fight back to tie the game at 11-11 three minutes later.

Valdosta State regained the lead and led 20-17 with 12 minutes to play in the first half before the Argonauts used an 11-0 run to grab the advantage. VSU missed all four of its field goal attempts during the UWF run while West Florida connected on all five of its shots, the last a three-pointer by Ellis Young that put the Argonauts in front 28-20 with 9:26 to play in the frame.

McKay ended the Blazer scoring drought with a free throw and, after a Terrence Townes lay-up for UWF, David Murray added a basket, but West Florida kept up the pressure as it extended its advantage to 12 points on a Nate Johnson lay-up five minutes later.

Valdosta State closed to within eight points three times over the remainder of the half, only to have the Argonauts claim a 43-33 lead at the break.

West Florida opened the second half on a 15-9 spurt to build a 16-point advantage and maintained at least a 12 point lead for the first 10 minutes of the half until a 10-2 Argonaut run midway through the half pushed UWF’s lead to 74-54 with 9:09 remaining in the game.

Valdosta State closed to within 14 points three minutes later, but the Argonauts scored the next eight points of the game to take their largest lead at 86-64 with 4:41 to go. VSU got no closer than 12 points the remainder of the game.

Larry Stone and Blake Justice tallied 18 points each to lead Valdosta State while McKay finished with 15 and Colin Cook 10. The Blazers made 29-of-61 field goal attempts to shoot 47.5 percent from the floor while also making 17-of-21 free throws.

Townes led West Florida with 26 points while Young had 23 points and 18 rebounds and Nate Johnson 21 points and 11 boards. The Argonauts made 36-of-74 field goals.

Valdosta State returns to action Thursday, February 20 when it hosts West Georgia at The Complex at 8:00 p.m. Fans are encouraged to wear red for the game as VSU aims to “Red Out The Complex.”