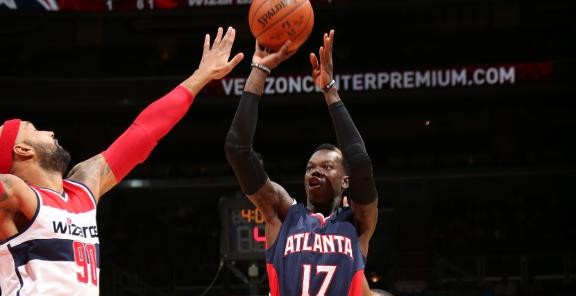 WASHINGTON — Paul Pierce was about 18 months old the last time Washington’s NBA team eclipsed 45 victories in a season. The Wizards’ four other current starters, including John Wall, weren’t even born.

And it’s a sign of how far the franchise has come after being so mediocre – or worse – for so long that Wall figures the Wizards really should be winding up with more Ws.

Wall had no trouble finding his rhythm after resting for two games, producing 24 points and nine assists Sunday night to lead the Wizards to their highest win total in more than 30 years by beating a second-string group of Atlanta Hawks 108-99.

“We had a lot of ups and downs, letting a lot of wins slip away. I feel like this was easily a 50-win season,” said Wall, who is 24. “But we’re happy where we are and the direction that we’re going.”

“That’s improvement,” Pierce said. “As the Washington Wizards’ organization continues to grow over the years, that’s the progress that we need to see.”

They are fifth in the Eastern Conference with two games remaining and will face Toronto or Chicago to open the playoffs.

Atlanta already has clinched the East’s No. 1 seed and won a club-record 60 games, so coach Mike Budenholzer rested starters Jeff Teague, Kyle Korver, Al Horford and DeMarre Carroll. Instead, the Hawks went with a lineup of Dennis Schroder, John Jenkins, Kent Bazemore, Mike Muscala and Elton Brand. That quintet came into Sunday with a grand total of 29 starts this season.

“I don’t think we’ve played as well or as consistently as we’d like – regardless of who’s playing – over the last two, three weeks,” Budenholzer said. “I think we can be playing better.”

The Wizards led by 18 points in the first quarter, 21 in the second, and 25 in the third. But some casual play by Washington in the fourth, when Wall had four of his 10 turnovers, allowed Atlanta to get within 101-92 on Mike Scott’s 3-pointer with 5 minutes left. Wall’s steal and breakaway slam got the hosts’ lead back to 12 with 3 1/2 minutes to go.

“They scared us for a minute,” said Bradley Beal, who scored 17 points for Washington.

Wall sat out Washington’s previous two games to get fit for the postseason, so he hadn’t played in eight days. He came out at full speed Sunday, with 13 points and six assists during a first quarter that ended with the Wizards ahead 38-22, two points shy of their highest output for any period this season.

After losing his dribble and turning the ball over to Shelvin Mack in the second quarter’s final seconds, Wall made up for it by blocking Mack’s shot.

“He got me on that end,” Mack said. “I kind of knew – I forgot – but that’s his thing, coming down and chasing people back.”