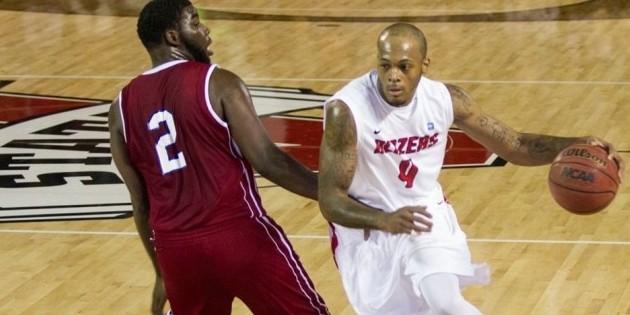 LIVINGSTON – Valdosta State’s recent woes continued on Monday night in Livingston, Ala. with a 76-61 loss to the West Alabama Tigers in Gulf South Conference play at Pruitt Hall Gymnasium.

The loss was VSU’s fifth straight and dropped the Blazers to 7-9 overall and 2-8 in the GSC, while West Alabama remained perfect at home after picking up their third straight win to improve to 11-7 overall and 6-4 against league opponents.

In the first period, the Blazers fell behind after an 8-2 run by the Tigers to open up the contest. VSU rebounded quickly, however, and answered with an 8-2 run of their own to lock the game up at 10-10 going into the first media break at the 15:40 mark.

The Blazers claimed their first lead of the night with 8:36 to play in the first after forward James Spencer, who racked up 16 points on the night, buried a three ball from the right wing to put VSU in front 22-21.

The Blazers gave up the lead on a dunk by Jarell Byrd one minute later, but Spencer gave Valdosta State the lead once again with a quick layup on the ensuing possession. A 6-0 run in the closing minutes helped VSU open up a 36-31 lead with just over two minutes to play in the first, but UWA scored the final four points of the half to close the Blazers’ lead to one point at intermission.

West Alabama quickly reclaimed the lead in the opening minute of the second half with a pair of free throws, which began a long back-and-forth stretch between the two teams that lasted over eight minutes and saw the Blazers tie the game up five different times.

At the 12:29 mark, the Tigers hit the first of two consecutive field goals that opened up a four point lead for UWA. The lead was one that the Tigers spread to 15 points down the stretch, and Blazers were never able to overcome the deficit throughout the remainder of the final period.

UWA enjoyed double-digit scoring nights by four different players, and the Tigers were led by Charles Eaton, who scored 18 points off the bench to go along with two rebounds and two steals. Byrd chipped in offensively for West Alabama with a near double-double that consisted of 17 points and nine rebounds.

Blazer senior Blake Justice led the Blazers with 18 points on the night. The senior led the offensive attack for VSU in the first half with 12 points but was held to six points in the second period, each of which came off of free throws.

Turnovers proved to be fatal for Valdosta State, as the Blazers committed 24 turnovers that led to 29 of the Tigers’ 76 points in the contest.

Valdosta State continues GSC play on Saturday in Pensacola, Fla. against the West Florida Argonauts. The matchup is slated for a 5:00 p.m. EST start and can be followed live at www.vstateblazers.com.