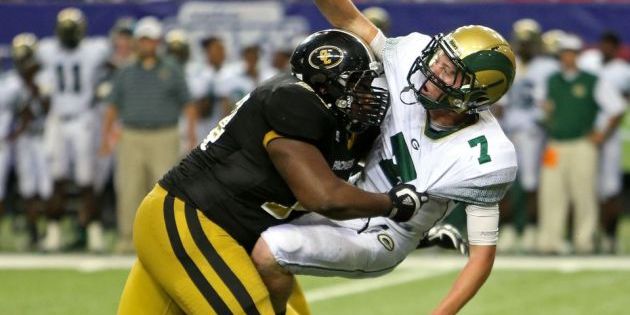 MOULTRIE — The Colquitt County Packers are due.  Coach Rush Propst is due.  South Georgia is due.

A lot has happened since Propst was hired to rebuild a Colquitt County football program that last saw a State Championship, the school’s only, in 1994.  From a team that had only 2 wins in 2007, Propst has worked to return the Hogs to prominence since he was hired in 2008.  That has meant high-profile games on national television, state semifinal appearances and national high school football rankings.  But that’s not what it’s about for the Packers.  It’s about winning another State Title.  That’s the goal.

The team next standing in their way is a McEachern squad that also made the state semifinals last year before, like Colquitt, losing out.  For the Indians, coming from one of the nation’s most blessed campuses thanks to a substantial endowment, their goal is their first title…ever.  McEachern last played in the title game in 1998, losing to Valdosta High 21-7.

The schools have both played each other in the semifinals before, too.  The Indians beat the Packers in 1998 before traveling to Valdosta for the aforementioned title game loss.

But this is 2014.  Colquitt is undefeated and ranked #5 nationally.  Star running back Shileim King, after starting slowly last week, gained 133 yards and had two touchdowns against Milton in the Packers win.  The Colquitt offense has demonstrated both an ability to score points and the will to come from behind.

McEachern lost their star running back, Taj Griffin who has already committed to Oregon, in the season’s first game, a loss to North Gwinnett.  They then lost again in the second game before winning seven straight, then losing the season’s final game before the playoffs began.  They’re currently 10-3.

It would seem the stars are lining up for the Packers.  Homefield.  Momentum. South Georgia’s Football Legacy.  Destiny?

We’ll see who will make the trip to the Georgia Dome for the State Championship, and if the Packers’ time is now.  The game kicks off at Mack Tharpe Stadium at 7:30.