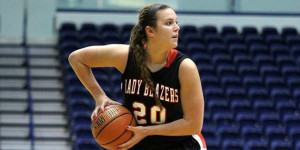 BIRMINGHAM, AL – The Valdosta State women’s basketball team saw their season come to a close on Thursday in the first round of the Gulf South Conference Tournament at the Pete Hanna Center in Birmingham, Ala., as the Lady Blazers fell to the West Florida Argonauts 64-49.

Valdosta State finished up 12-15 for the 2013-14 campaign, and the West Florida Argonauts improved their record to 17-10 overall. The win for UWF advanced the team to the semi-final round of the GSC Tournament, where they will square off against the winner of #3 Alabama-Huntsville and #6 West Georgia.

Points were hard to come by early in the contest, with each team scoring only one bucket apiece in the first four minutes. After the first media break, however, the Argonauts began to heat up.

Four different players scored baskets for West Florida in the ensuing five minutes, which allowed the Argonauts to open up a 12-6 lead halfway through the first period.

Over the course of the next ten minutes, The Lady Blazers made up for lost time with a six minute span in which the Lady Blazers quadrupled their point total. The stretch was sparked by a layup by Duke at the 9:13 mark and was fueled throughout the remainder of the first half by a ramped up shooting effort.

Courtney Sprague and Brooke Satterfield buried timely threes to keep Valdosta State within striking distance during the run, and the Lady Blazers cut the lead to as few as three points when Duke dished out two consecutive assists to Reshaundra Owens for back-to-back layups with less than 1:30 to go in the half.

UWF’s Toynetta Johnson closed out the period with a five footer during the final ten seconds to boost the Argonauts lead to 29-24 at the break.

In the second half, West Florida kicked off a 10-2 run during the first five minutes that pushed the Argonauts out to a 39-26 advantage. Katie Bobos, who was named the Gulf South Conference Freshman of the Year on Wednesday, triggered the surge with the first four of UWF’s second half points and finished the contest with a total of 14 points.

The Lady Blazers made one final push late in the contest, thanks in large part to a strong second half effort by April Thomas, who scored each of her 14 points in the second half, but West Florida continued to produce on offense and never allowed the Lady Blazers to shrink the gap any closer than eight points.

Thomas led all scorers for Valdosta State, while Duke tacked on an additional 9 points for the Lady Blazers. Owens hauled in the team lead in rebounds with seven on the afternoon, and senior Kamyia Smith finished the contest with five points and six steals, five of which came in the first five minutes of the game.

The Argonauts’ 40.0 percent shooting effort was boosted by Tessah Holt, who led West Florida with 20 points in the contest, while Johnson added ten.

The Lady Blazer bench outscored UWF’s reserves 19-14, but the Argonauts won the battle of the boards, as they outrebounded Valdosta State 48-36. Bobos led the way in the rebounding column, as she pulled down twelve to account for her fourth double-double of the season.