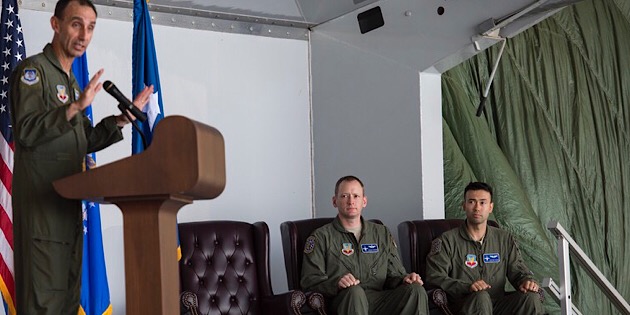 “The bravery these two Airmen displayed in combat makes me extremely proud,” said Maj. Gen. Scott J. Zobrist, 9th Air Force commander. “You both demonstrated our aviators are the most highly capable professionals in the world.”

The DFC is awarded to someone who distinguishes themselves in support of operations by heroism or extraordinary achievement while participating in aerial flight. Dana and Cichowski were active on the same deployment but were recognized for their actions on separate missions.

Dana and his wingman were alerted by a Joint Terminal Attack Controller (JTAC) that the enemy had breached friendly lines in eight locations causing multiple casualties Aug. 14, 2017.

“As soon as we checked in, there was an immediate need for support,” Dana said. “There was a sense of urgency felt. I needed to get out there quickly because good guys were dying.”

In a three-hour period, Dana employed 11,000 pounds of ordnance, killing 37 enemies and destroying 10 enemy defensive fighting positions with no friendly losses. While low on fuel, having few bombs remaining and pro-regime aircraft tracking his location, Dana elected to conduct an airstrike on enemies attacking friendly forces from a four-story building just 30 meters away.

“At the point of weapons release, I trusted my training,” Dana added. “I had to account for the wind, because that affects where the ordnance drops, and with friendlies being that close, I wanted to take responsibility for everything. This is my weapon from my jet and the effects are on me.”

He accepted the risk and full responsibility for the danger-close attack and guided the weapon to the target, eliminating the enemy without any friendly injuries.

Throughout the deployment, mission after mission, the pilots of the 74th FS watched the enemies’ presence shrink and activity decline as they helped the SDF gain control of the region. However, toward the end of the deployment the enemy tried to regain control.

“We’d been diving a lot and had already been shot at once,” Cichowski added. “We started to realize this is a coordinated attack and not a random fight like we originally thought. At this point, neither of us were strangers to combat with friendlies close. We knew what to do and how to correctly do it.”

Coordinating with a JTAC and synchronizing with a remotely piloted aircraft (RPA), Cichowski identified 25 enemy fighters 150 meters away from friendlies. He employed a 2,000 pound Joint Direct Attack Munition and proceeded to use the GAU-8 gun at the nose of the A-10C to wipe out the rest of the enemy while they countered with a barrage of anti-aircraft artillery.

“We ensured we were all looking at the right thing, and checked and double checked so we didn’t get anything wrong,” Cichowski added. “We all trusted each other. At no point was I afraid we were going to make a mistake and drop bombs on friendlies or civilians.”

Cichowski escaped unscathed, thwarting the largest coordinated attack of enemy fighters seen in that region without a single friendly loss. For this, Cichowski was awarded the DFC with valor, which is a distinction given to those who earn the DFC while engaged in direct combat with exposure to enemy hostilities and personal risk.

“DFC nominations are scrutinized very carefully, and every detail is validated to ensure facts are accurate,” Zobrist added. “It was an honor for me to present them with the DFC. They are very rare decorations, and it reflects highly on them and the entire 23rd Wing for their amazing accomplishments in supporting their Nation.”

By the time these Airmen returned to Moody, the SDF was able to take hold of most of their region and major cities were liberated.

“It’s unbelievable to get a mission like this and to see the enemies’ control of the area shrink each week,” Dana said. “The sense of pride I have to effect the fight the way we did leaves me at a loss for words. None of us could do this without our wingmen, JTACs and the RPAs. The trust and information flowing through the entire CAS team ensures we get the job done right.”