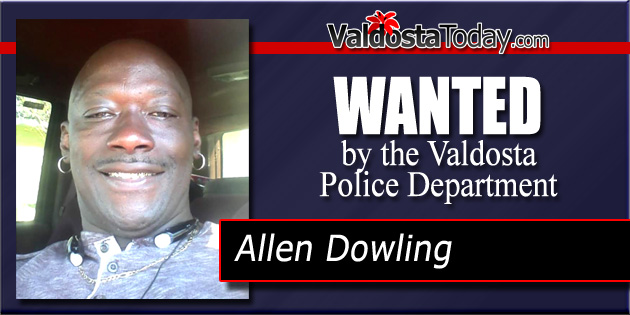 Allen Dowling was arrested Tuesday, Dec. 27 by Lowndes County Sheriff’s Department. He led deputies on a car chase, which resulted in a crash. Dowling fled on foot but was apprehended by a deputy.

VALDOSTA – Valdosta Police Department are asking for assistance in locating Allen Dowling, 51, after he fled from officers during the search of a residence.  Multiple arrest warrants for him include charges of drug possession, possession with the intent to distribute, aggravated assault on a peace officer, and possession of a firearm by a convicted felon.

Police detectives are asking for assistance in locating Dowling, but Lieutenant Adam Bembry warns that “This subject should be considered dangerous.”  If anyone has contact with the suspect or knows his whereabouts, they should call 911 immediately.

The VPD released the following information in a Public Information Release Report:

Over the past several weeks, the Valdosta Police Department’s Narcotics Unit has received numerous citizen complaints for illegal narcotics sales, gang activity, and weapons violations, in the 700 block of E. Brookwood Drive.

After a few weeks of investigation, Narcotics Detectives with the assistance of the VPD Power Squad, served a search warrant at a private residence in the 700 block of East Brookwood Drive.  Upon the execution of the search warrant, the resident and primary target, Allen Dowling, was sitting in his vehicle in the driveway.  As detectives attempted to seize Dowling from the vehicle, he drove towards them in a reckless manner, almost striking a detective and two police vehicles.  Dowling fled the scene in his vehicle, which was later found abandoned by the Lowndes County Sheriff’s Deputies in the county.  Narcotics Detectives completed the search warrant inside the residence and recovered tools indicative of narcotic sales, a handgun, alpha-PVP, powder and crack cocaine, and marijuana.

At this time Dowling’s whereabouts are unknown and detectives are asking for assistance in locating him.   Arrest warrants have been obtained for him for:

“This subject should be considered dangerous, if anyone has contact or knows the whereabouts of the suspect, they are asked to call 911 immediately,” said Lieutenant Adam Bembry.