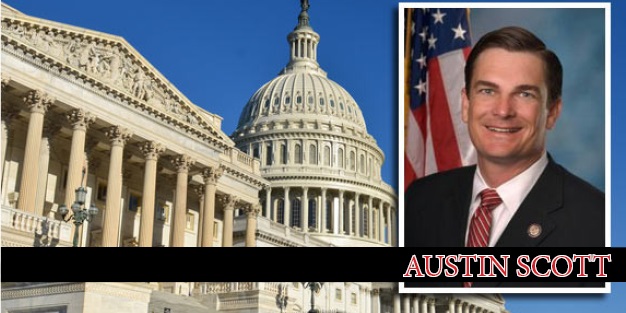 From the Office of Rep. Austin Scott:

“As we are presented with more choices at the gas pump, it is imperative that American consumers know exactly what kind of fuel they are putting into their engines,” said Congressman Scott. “Gas pumps today are riddled with confusing labels that fail to adequately warn consumers of the dangers of fueling small engine equipment with E15. For this reason, with the support of Congresswoman Frankel, I introduced the Consumer Protection and Fuel Transparency Act of 2018. By making fuel pump labels easier to decipher and coordinating public education programs, this legislation can save consumers time and energy at the pumps and avoid headaches and costs down the road.”

“Thanks to the leadership of Representative Scott and Representative Frankel, American consumers and 141 million recreational boaters will be better insulated from the danger of improperly fueling their boat engines with an unsafe, unreliable and often incompatible fuel option,” said Thom Dammrich, President of the National Marine Manufacturers Association. “E15 fuel is often sold at retail gas stations, and currently 63 percent of consumers assume all products sold at these stations are safe for their engines despite the fact that high ethanol fuel blends are prohibited in boat engines. The Consumer Protection and Fuel Transparency Act of 2018 addresses that challenge head on and will direct the Administrator of the EPA to revise the labeling requirements for fuel pumps that dispense E15, and to develop and execute a public education campaign that expands awareness of the risks associated with E15.”

The Consumer Protection and Fuel Transparency Act of 2018 would require more detailed labeling of gas pumps that dispense E15 fuel, or fuel with a 15% ethanol, 85% gasoline blend. E15 fuel has been determined to not be suitable for small engines in outdoor equipment and non-road products as E15 can cause corrosion, reduced fuel storage, and less engine lubrication resulting in engines to overheat. Examples of impacted equipment include items such as lawn mowers, weed eaters, generators, motorcycles, all-terrain vehicle (ATVs), and boats, among others. E15 can also cause issues for vehicles, especially those produced before 2001.