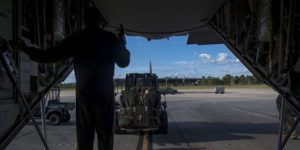 “The Airmen of the 334th Air Expeditionary Group are mission ready and prepared to provide the necessary Air Force rescue and personnel recovery capabilities,” said Col. Jennifer Short, 23d WG commander. “When called upon, the AEG Airmen will respond at a moment’s notice to support potential recovery operations to help those impacted by Hurricane Florence.

“Our thoughts and prayers are with the families and communities in the Carolinas who have been affected by Florence.”

In the wake of Hurricane Florence, both wings received a prepare to deploy order requiring them to have assets ready to potentially respond to recovery operations.

Hurricane Florence, now downgraded to a tropical storm, is still capable of producing powerful winds, storm surges and the extremely heavy rainfall that will continue to be a serious hazard associated with the slow movement of Florence, according to the 23d Operations Support Squadron weather flight.