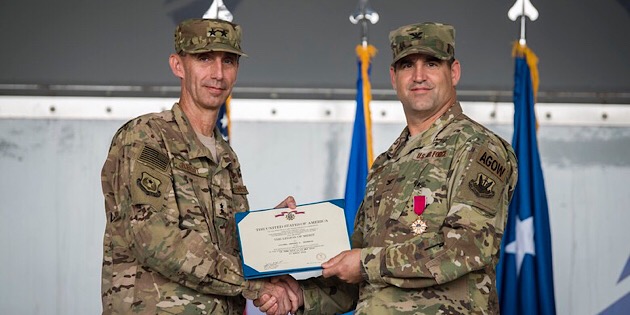 Maj. Gen. Scott J. Zobrist, 9th Air Force commander, presided over the ceremony, offering remarks on what Valenzia has achieved and also introducing Birch as the 7th Airman to take command of the 93rd AGOW.

“The 93rd AGOW has Airmen deployed around the world and Colonel Valenzia has done a great job executing the AGOW’s remarkable mission,” Zobrist said. “I take a great deal of pride in what the 93rd AGOW does in service of our nation, and I am very excited for what its future holds.”

Zobrist acknowledged Birch as an excellent replacement with an equally excellent resume that qualifies him to command the over 2,800 battlefield Airmen at more than 20 locations throughout the continental U.S.

“Col. Paul Birch has an impressive record and is a strategic leader with a warrior’s heart,” Zobrist added. “It’s clear from watching Colonel Birch while deployed that he possesses the desire and determination to continue to lead this wing to bigger and better things.”

Birch thanked Zobrist for his continued support and vote of confidence in his ability to lead the 93rd AGOW as he looks forward to the future.

“The warm welcome I’ve received from everyone here at Moody has been wonderful; I really feel as if I’ve joined a family,” Birch said. “This is truly a culmination of all of the hard work and lessons I have learned over my military career, and I am incredibly thrilled to be given this position and I’m ready to get started.”

While expressing their anticipation for the future of the 93rd AGOW, Zobrist recognized and expressed his gratitude towards Valenzia for his exemplary two-year command of the 93rd AGOW.

“The result of Colonel Valenzia’s hard work has been an enormous level of success,” Zobrist said. “His efforts in getting this remarkable wing going in the right direction and taking it to the next level have been phenomenal.”

Birch echoed though sentiments and thanked Valenzia groundwork he laid as commander.

“I can’t say enough on the great job Colonel Valenzia has done here commanding the 93rd AGOW,” Birch explained. “He’s laid a wonderful foundation for me to build on, and I’m just looking forward to living up to it.”

“I have relished at the opportunity to lead such a remarkable unit,” Valenzia said. “I am honored to count myself as part of the great legacy of the 93rd AGOW, and I thank you all for your continued service and dedication to our remarkable mission.”

Valenzia will be moving on to assume the executive assistant to the North American Aerospace Defense Command U.S. North Com commander at Peterson Air Force Base, Colo.