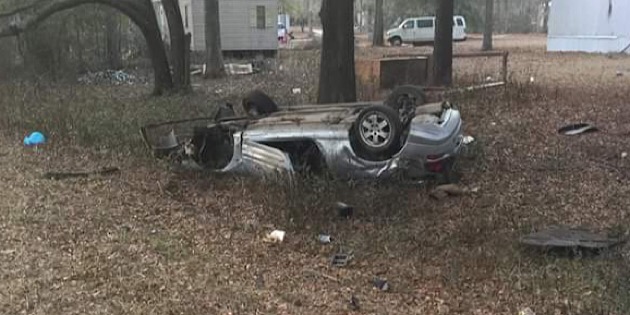 Jennifer Marie Penney, 33, of Valdosta has been transported to Tallahassee Memorial Hospital via Air Method for injuries sustained in the crash.

Christine Fletcher was a witness on scene at the time of the incident. According to Fletcher, a concerned citizen who she identified as William Neighbors, pulled Penney from under the car after the crash occurred.

“Will had to cut her seat belt because she was suffocating in the position he found her and was able to get her out,” Fletcher said.

Other citizens on scene attempted CPR on Shelton while waiting for paramedics to arrive.

Below is the official report from Georgia State Patrol.

On 2/1/2018 at approximately 1741 hours, CPL Chris Kelch #404 was dispatched to a single vehicle crash on Clyattville Nankin Road at Sand Oak Drive in Lowndes County. A silver Mitsubishi Eclipse convertible, driven by 33 year old Jennifer Marie Penney of Valdosta, originally from Irvington, Alabama, was traveling west on Clyattville Nankin Road attempting to negotiate a curve. The vehicle, which was traveling above the posted speed limit, traveled off the north shoulder of the roadway into a ditch. The Eclipse then began to overturn numerous times. The front seat passenger, 49 year old Jason Dwayne Shelton of Valdosta, originally from Warren, Texas, was ejected from the vehicle. Mr. Shelton was not restrained in the vehicle and came to a rest off the north shoulder of the roadway in the ditch. The vehicle came to a final rest off the north shoulder of the roadway on its top facing west. Ms. Penney, who was properly restrained was extricated from the vehicle and transported to Tallahassee Memorial Hospital via Air Methods for injuries sustained to her head. Witnesses attempted CPR on Mr. Shelton; however, he succumbed to his injuries and was pronounced deceased on scene by Coroner Austin Fiveash. Troopers suspect speed and alcohol to be a contributing factor in this collision. Toxicology reports will be pending. Charges will be pending upon the completion of the investigation by Georgia State Patrol’s Specialized Collision Reconstruction Team. Next of kin for Mr. Shelton have been notified.