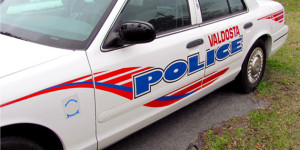 VALDOSTA, GA – On Tuesday at approximately 1:21 pm, the Valdosta Police Department Narcotics Detectives followed up on a tip that there was an African American male in the 600 block of Hudson Street who had narcotics on his person.

Detectives then made contact with Willie Hunter, 42 year old, Valdosta resident. During the encounter, Hunter assaulted one of the detectives, who had his K9 partner with him. The quick aggressive movement when Hunter shoved the detective resulted in the K9 biting him. Hunter fled on foot and was found hiding under a residence in the area, where he was taken into custody.

Hunter was transported to South Georgia Medical Center where he is receiving treatment for the dog bite. Several pieces of crack cocaine were recovered by detectives.

Hunter faces charges of possession with intent to distribute-cocaine, felony obstruction, misdemeanor obstruction, and tampering with evidence. When Hunter is released from SGMC, he will be taken to the Lowndes County Jail.