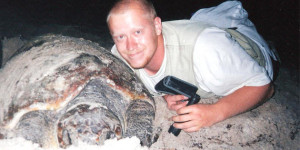 VALDOSTA, GA – Extreme weather conditions often lead to discussions and debates about the overall topic of climate change. For Dr. Joshua Reece, assistant professor of biology at Valdosta State University, examining climate change along with other factors like sea level rise and human impacts can help identify potential threats to biodiversity and provide insight on ways to decrease possible risks.

Another recent paper published in the Marine Ecology Progress Series focuses on a case study of how sea level rise affects sea turtle nesting beaches in the United States. In this study, Reece worked with colleagues to generate a multiple regression model based on climate change, sea level rise and land use and its influence on the distribution of loggerhead turtle nests along Melbourne Beach, Fla.

“Along beaches, we protect marine turtles by designating areas for them that are deemed safe and protected,” said Reece. “The areas are fixed and don’t move because we assume that the conditions will stay the same. However, factors like building beach front homes, rising sea levels and changes in climate can alter these conditions.”

According to Reece’s study on the loggerhead turtles, their placement of nests have shifted northward over the course of 20 years. This move has been a shift away from coastal development – most likely in response to warming temperatures –toward areas of increased erosion. The study found a decrease in the width of beaches by over 10 feet from 1986 to 2006, with models projecting a 43 percent loss in beach area by the year 2060. Their study suggests that turtles will continue to migrate northward and eventually become crowded as beaches continue to shrink.

“Because changes in temperature can move organisms elsewhere, understanding what influences this is very important,” said Reece. “One thing that is novel about this study is that in the past, others have looked at how climate change, sea level and building beach front homes individually affect organisms. However, in this study we looked at all three at the same time and the synergistic effects they have.”

Reece added that the research helps shed light on what to expect in the next 20 to 50 years from now.

“Marine turtles have been in the Atlantic and moved as the beaches moved,” he said. “However, now we build roads, big condominiums and houses that stop the beaches from moving. We have modified the habitat so it can’t respond naturally. Therefore, you can’t just look at climate change. You also have to look at the way humans alter the environment.”

Smaller beaches do not only affect marine animals, however.

“Beaches take the brunt of many storms,” said Reece. “Storms lose much of their intensity before they reach land. However, as we lose beaches we can expect to see more storm damage to land and property. As a result we will lose tax money because we are paying to rebuild beach front homes, other buildings and roads.”

The research was funded by a grant from the Kresge Foundation, which supports projects that focus on community development and crisis prevention and relief.

Reece joined Valdosta State as an assistant professor in Fall 2013. He holds a bachelor’s and master’s degree in biology from the University of Central Florida and a Ph.D in biology from Washington University in St. Louis. He currently teaches Introduction to Biology courses and a coastal biodiversity course at VSU.

Reece’s areas of research include coastal biodiversity and macroevolution. He is currently developing projects for VSU undergraduates who are interested in conducting research on changes in the nesting patterns of marine turtles in Georgia, similar to the one completed in Florida.