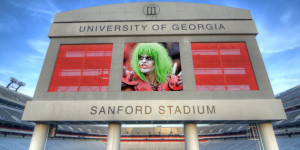 VALDOSTA, GA – If you are a Georgia fan then you have probably seen the Georgia Joker in the stands every game this year. He is the epitome of a super fan for the Georgia Bulldog football team. His favorite spot to sit, or stand, when the Bulldogs play between the hedges is section 109. The Georgia Joker is now a finalist for ESPN’s Fan Hall of Fame, but who is the Georgia Joker you may ask?

Pierce Wallace, a former Valdosta Wildcat, is the man behind the paint of the Georgia Joker. He has been featured on almost every major media outlet for his die hard loyalty to the Georgia Bulldogs. Wallace has made ESPN’s Official Twitter page, photos posted on Sports Illustrated Fans of the Week three times, the front page of the Florida Times-Union Newspaper, the cover man for a UGA-LSU game article, numerous ESPN College Gameday close-ups, and many many more.

Everyone knows Valdosta as Titletown, well now let us help bring Pierce Wallace a title of his own. You can vote for Wallace at ESPN’s Fan Hall of Fame Website (Click Here) . You are allowed to cast three votes a day until December 11th. You can cast all of those votes to Wallace, or to any of the other finalist at your discretion. Let’s show Wallace the support he has from Titletown, USA, and bring home another title to Valdosta.

Here is the link to vote for Wallace: