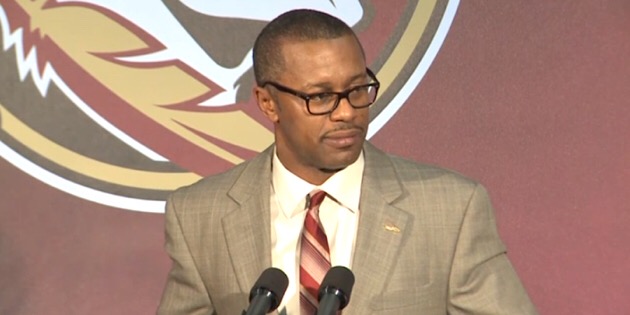 “The energy, the passion, and his philosophy were exactly what we were looking for,” Wilcox said ahead of Taggart’s introduction.

FSU President John Thrasher drew gasps from the crowd when he called the Taggart decision a “no-brainer,” a clear dig at Jimbo Fisher for his comments on his decision to leave FSU for Texas A&M.

Taggart then took the podium with a huge smile.

“Don’t be afraid to chase your dreams,” he said, telling the story of growing up in a Seminoles household and always dreaming of becoming a Seminole.

“No matter where I went, Seminoles were always a part of me,” Taggart said. “I’m in. I’m in now. And really excited,” he said.

He finished by saying there’s a lot of work to be done and mentioning the early recruiting period this month.

Taggart, a Bradenton, Florida native, comes to FSU after one year at the University of Oregon.

In his first season, he lead the Ducks to seven wins and had a top ten recruiting class.

His previous head coaching stops were at Western Kentucky and South Florida.

Taggart takes over a Florida State program that’s had just two coaches in the past 42 years– Bobby Bowden and Jimbo Fisher.

Under each, the Noles were one of the elite teams in college football, winning national championships, producing Heisman trophy recipients, and grooming players who went on to great success in the NFL.