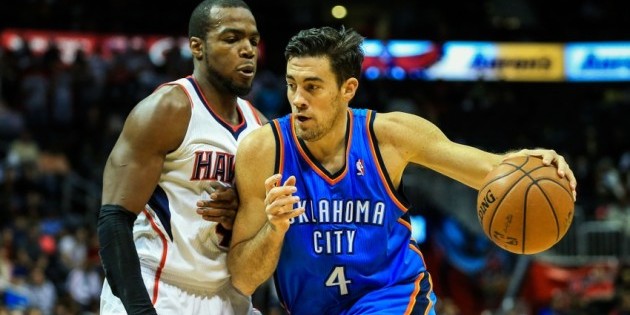 ATLANTA — The Atlanta Hawks romped to their 15th straight victory, the longest streak in franchise history.

Don’t expect them to savor it for long.

This team is focused firmly on what’s in front of them.

Paul Millsap scored 22 points, Jeff Teague added 17 and the Hawks broke the record with a 103-93 victory over the Oklahoma City Thunder on Friday night.

“It’s a good accomplishment,” Millsap said, sitting in a rather somber locker room. “But it’s just another win.”

The wins keep piling up for a team that no one expected to be a title contender at the beginning of the season. Before a raucous sellout crowd, the Hawks came out on top for the 29th time in 31 games to extend their Eastern-best record to 36-8.

As usual, pretty much everyone chipped in.

Four starters were in double figures and backup point guard Dennis Schroder led a spurt at the start of the fourth quarter that helped the Hawks pull away. He finished with 13 points and five assists, igniting the arena with a towering finger roll that dropped gently through the net.

“Give me five really good guys,” Millsap said, “and I’ll go out there and win with `em.”

Russell Westbrook led the Thunder with 22 points, but it wasn’t enough to extend their four-game winning streak.

Kevin Durant added 21 points, while Serge Ibaka with 13 was the only other Thunder player in double figures.

The Hawks were much more balanced. Al Horford had 14 points and 12 rebounds, while DeMarre Carroll chipped in with 13 points. Kyle Korver was the only starter who didn’t reach double figures, but even he chipped in with a play that had everyone talking: another dunk in the waning seconds of the first half that sent the Hawks to the locker room with a 48-47 lead.

They never trailed again, strolling off the court at the end with the public-address announcer screaming “15 in a row!”

“It’s cool to get your name in the record book,” Carroll said. “At the same time, we’ve got bigger tasks at hand. That’s making it to the playoffs and bringing an NBA championship to Atlanta.”

The crowd of 19,203 marked the third sellout in Atlanta’s last four games. In a sign that the attendance-challenged city is really getting behind its team, most of the crowd came to cheer for the home team rather than to see an out-of-town star.

“They’ve jumped on the bandwagon now,” Durant said. “The crowd was great tonight and really helped them out.”

He’s also impressed with what Atlanta is putting on the court.

“They’re a really good team,” he said — over and over again.

Schroder led the decisive spurt after Durant started the fourth quarter with a free throw that closed the gap to 79-76. The lightning-quick German scored with a drive, hit two free throws, then laid off a pass that set up Horford’s layin. Schroder’s nifty finger roll capped the 8-0 run that pushed Atlanta to a double-digit lead for the first time, 87-76.

The Thunder never got closer than eight and trailed by double digits pretty much the rest of the way.

“My confidence is through the roof right now,” Schroder said.

Atlanta broke the franchise record set during the 1993-94 season, when they finished with the best record in the East but were upset in the second round of the playoffs.