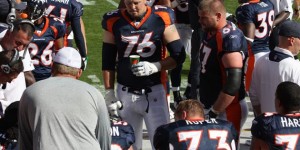 DENVER, CO – Quarterback Peyton Manning and the Denver Broncos are Super Bowl bound. The team earned a 26-16 victory against the New England Patriots in the AFC Championship Game at Sports Authority Field on Sunday, making this the franchise’s seventh Super Bowl appearance. Manning led the offense completing 32-of-43 passes for 400 yards with a pair of touchdowns in the win.

“Well, it’s an exciting feeling,” Manning said after the game. “You do take a moment to realize that we’ve done something special here and you certainly want to win one more.”

Manning’s 400 passing yards were the third-most for his career in the postseason. His 118.4 rating was the fifth-best for his playoff career. And for the third time, he’s going to play in the Super Bowl. Manning connected with eight different receivers in the win.

“I know how hard it is to get there, it’s extremely difficult,” Manning said. “You do have to take a moment and enjoy the locker room with your teammates and enjoy dinner tonight with your family and friends.”