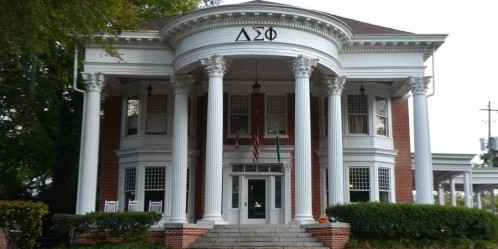 ATHENS — Criminal charges may be forthcoming for a University of Georgia fraternity involved in a hazing incident.

The Athens Banner-Herald is reporting the Theta Chi chapter of the Delta Sigma Phi fraternity forced pledges into trash cans filled with ice water.  According to the report, UGA officials received a tip last month concerning reported physical violence during an initiation ceremony.

The university police recently submitted results of their investigation into the incident, which occurred on the 26th of September, to Clarke County Magistrate Judge Patricia Barron for possible issuance of warrants, according to the report.

Police and UGA administrators began their investigation after the mother of one of the fraternity’s 32 pledges called UGA officials anonymously, saying a pledge had been injured in an initiation ceremony.

UGA police interviewed the pledges and officers of the fraternity, though most were not willing to cooperate.  However, at least one of the pledges had visible injuries.

Some, though, did eventually speak.  Police reported that pledges confirmed that they had been made to get into a trash can filled with ice water and recite fraternity history. The quicker they recited the history, the sooner they could get out of the water.

Under Georgia law, a person can be guilty of hazing not only for causing injury to others, but by placing others in a situation where they could be harmed.  The investigation is still in process.

The university has already suspended the fraternity from holding organized events such as socials, business and alumni meetings.  The national fraternity has also suspended the chapter while the investigation continues, though they did state that they believed the pledges were not in danger.