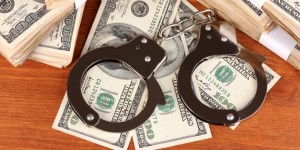 Aubrey Lee Price, 47, originally from Lyons, Georgia was indicted in July 2012 by a federal grand jury in the Southern District of Georgia on a charge that he defrauded the Montgomery Bank and Trust in Ailey, Georgia, of over $21 million. Price was arrested by the Glynn County Sheriff’s Department after they conducted a random vehicle and traffic stop.

Before Price’s arrest, he was last seen in June 2012 boarding a ferry terminal in Key West, Florida, heading to Fort Myers, Florida. He then disappeared after writing a letter to acquaintances that he had lost a substantial amount of money, and he planned to take his own life. A Florida judge declared Price dead over a year ago, but the FBI didn’t believe Price was dead and continued to search for him.

Price was arrested by Glynn County Sheriff’s Department on I-95 in Brunswick, for a vehicle and traffic violation. When deputies learned Price’s true identity, he was taken into custody. Price faces one charge in the Southern District of Georgia of bank fraud, which carries a maximum of 30 years in prison and a fine of $1 million. He also faces charges in New York.