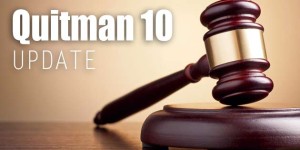 A judge has granted a mistrial motion made by the defense of Lula Smart, one of the “Quitman 10.”

The Defense Attorney, Chevene King, claims that the Judge jeopardized Smart’s right to a fair trial after he debated with King on the statue regarding the Illegal Possession Of A Ballot while in front of the trial’s jury.

Judge Ronnie Lane initially denied the motion for a mistrial, but would later approve it.