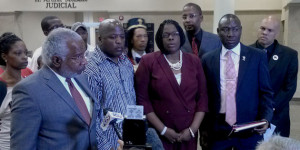 VALDOSTA, GA — On Tuesday, October 22nd,  Chevene King and Benjamin Crump, attorneys for the family of Kendrick Johnson, filed a petition for a coroner’s inquest in the Lowndes County Superior Court. The Johnson Family is seeking to have Lowndes County Coroner Bill Watson call a coroner’s inquest into their son’s death. At the center of the family’s concern is the difference in the initial autopsy report filed by the state and the second independent autopsy report.

Attorney Crump stated the main priority of this inquest is to gain access to the surveillance footage from the gymnasium the night of Kendrick Johnson’s death. “If that video shows others in that gymnasium as has been reported, then they have a right,” said Crump, “it is right and justice demands so.” Attorney Benjamin Crump stated the family has been told the video is an academic record. “When you think just common sense…common sense would suggest a video surveillance tape is not an academic record,” said Crump, “it is there for people to be able to look at the contents of it and decide if something has happened.”

Kenneth Johnson, Kendrick’s father, stated it has been a hard road these past few months, but he is not ready to give up. “Lowndes County, They ain’t used to families fighting against them. Whatever it takes, how long it takes, we are there, we are going to stay,” said Johnson. “It’s hard, it’s hard to deal (with the death) of my son,” said Johnson, “it can’t get any harder than that.”

Benjamin Crump said the courts will hold a hearing on October 30th to decide where the case will go from here.