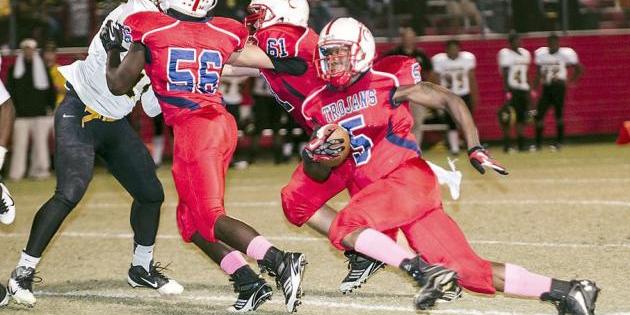 VALDOSTA — Only 3 area high school football programs remain to battle for a state crown in this year’s Georgia High School Association.  This weekend’s games will eliminate another group as the playoffs get ready to establish this year’s final four.

The Packers from Colquitt County are still riding a crest that many equate to one of their best teams ever.  Colquitt, in Class AAAAAA and ranked nationally for most of the season, brushed aside a Dacula side last week 51-30 and will now host Milton in Moultrie.  Only another state title for the Black and Gold will suffice at this point, according to most Packer fans.

Coach Maurice Freeman’s Brooks County Trojans continue their winning ways as they will host Heard County in Class AA.  The Trojans defeated Washington-Wilkes 21-14 last week to earn the right to be, once again, among the Elite Eight.  That’s nothing new for Freeman’s program, one of the state’s best in AA.  Washington-Wilkes crushed Screven County 28-6 to earn the right to travel to Quitman.  Both teams believe they have earned the right to be among the final four this year.

The Purple Hurricanes of Fitzgerald will host affluent Pace Academy of Atlanta in Class AA.  Both Fitzgerald and Brooks hail from Region 1 of Class AA, showing the strength of the Region in that classification.  Fitzgerald defeated Model handily, 48-14 while Pace knocked off Jefferson 57-50.

Make is a great weekend by supporting one of these local programs this Friday night.