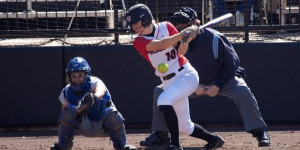 VALDOSTA, GA – The Valdosta State Blazer softball team scored 19 runs in two games against Lander to pick up a 9-2, 10-4 double header sweep over the Bearcats in NCAA Division II softball action at Steel’s Diamond at Blazer Park on Thursday evening.

The pair of victories accounted for Valdosta State’s 19th and 20th wins of the year against just eight losses, while the Bearcats fell to 6-16 overall on the season.

Courtney Albritton started the night off with a bang, as she ripped a solo shot to left field to lead off the bottom of the first inning and give the Blazers an early 1-0 lead. The home run was the eighth of the year for Albritton and marked the third time this season that the Sycamore, Ga. native has homered in the first at bat of the game for Valdosta State.

The Blazers spread their lead to 2-0 in the second inning when Albritton singled in Hannah Strickland from second base. Strickland had reached earlier in the inning with a leadoff double.

Two innings later, the Bearcats gave Brianna Hancock a bit of trouble and took advantage of two walks to score twice and knot the score up at 2-2. The offensive effort by Lander was enough to chase Hancock in the fourth which resulted in a no decision for the Blazer ace.

Facing a tie score heading into the bottom of the fourth frame, Valdosta State responded in a big way with four runs of their own on two hits and one error by the Bearcats. Fran Johnson,Shelby Altman, Strickland, and Albritton all drove in an RBI in the inning and helped to open up a 6-2 lead.

The Blazers put an exclamation point on game one with a three run sixth inning that included a two run homer by Johnson for her second of the season and her third RBI of the game. Over the course of the last five games, the red hot Johnson leads the team with a .471 batting average with eight hits in 17 plate appearances. In addition, the junior has scored six runs, ripped one double, launched a homer, driven in six RBI’s, and tallied 12 total bases during that span.

Caitlyn Calhoun, who came on for Hancock midway through the fourth inning, claimed the win for the Blazers and improved her season record to 4-1.

Although the Blazers got off to a slow start in game two, the contest ultimately proved to be more of the same, as Valdosta State plated 10 runs in the contest to outscore Lander by six.

The big inning for the Blazers came in the fourth when VSU entered the bottom of the inning trailing 4-1. Karson King reached on a fielding error by shortstop Reychel Webster to lead off the half inning, and two batters later, Strickland singled through the left side. Brandi Blount, who pinch ran for King earlier in the inning, moved to third on the single and Strickland stole second base to place both runners in scoring position. During the next at bat, Blount crossed the plate on a wild pitch to bring Valdosta State within two at 4-2. Kelly Gordon added to the cause with a sacrifice fly to cut the lead to one, and Heather Robinson drilled a two out double to the gap in left center. The two bagger set up Johnson with another RBI opportunity, and she answered with a rope back through the box that brought Robinson in to score and tie the game up at 4-4. The inning wasn’t over though, as Johnson later came around to score the Blazers’ fifth and final run of the inning when Lander third baseman Aubrey Lamar fired low on an attempt to throw out April Collins at first base. The error allowed VSU to take a 6-4 lead, one that they would never relinquish.

Strickland put together a great day on both sides, with three hits in six at bats, four runs scored, and one RBI at the plate, along with several sizzling plays at third base. In the fourth inning of game two, Lander hit into the teeth of the Blazers’ outstanding left side with two consecutive line outs to the sure-handed Strickland.

Altman finished the day with a 4-for-7 effort and three RBI’s. One of her four hits was a home run that was, in all likelihood, one of the longest home runs ever hit at Steel’s Diamond. The blast over the centerfield wall was measured off at 268 feet, despite being a line drive that left the yard in seconds.

Maci Fletcher collected her sixth win of the year and has yet to lose a game for the Blazers this season.

Valdosta State hits the road tomorrow to travel to Livingston, Ala. for a three game weekend series against the Tigers of West Alabama. The first game of Saturday’s twin bill is set to start at 4:00 p.m. EST. The series wraps up on Sunday afternoon with a 2:00 p.m. EST contest. Follow the action live, right here at www.vstateblazers.com.