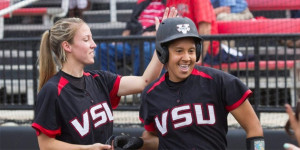 VALDOSTA, GA – The Valdosta State softball team opened up a weekend series against the Argonauts of West Florida with a 2-6, 10-6 split in Gulf South Conference Softball action in Pensacola, Fla. on Saturday.

In what initially appeared to be a quiet game one third inning, West Florida strung together a two out rally that plated three runs to break the 0-0 tie and give the Argonauts a three run advantage. Following the first two outs of the half inning, UWF teamed up for a series of at bats that included a walk, a single, and back to back doubles by Jessica Wilkinson and Elizabeth Nugent to cap off the three run barrage.

The Lady Blazers were unable to break through in the top half of the fourth inning, and the Argonauts expanded VSU’s deficit in the bottom half of the fourth thanks to a two run homer off the bat of Jenna Belser, her first of the year. The long ball brought in Jordan Camp, who pinch ran for Lou Barnard after her leadoff single, and gave the Argonauts a 5-0 advantage after four.

An additional insurance run for West Florida in the fifth inning came in the form of a solo shot by Wilkinson, which broke open a six run lead for the Argonauts.

The Blazers were held scoreless until the top of the sixth when Shelby Altman blasted a two run shot to center field for her second of the season, which cut the deficit to 6-2 and brought in April Collins, who finished the game a perfect 2-for-2.

Brianna Hancock suffered the loss for Valdosta State and fell to 6-3 on the year, while Argonaut pitcher Taylor Bailey’s seven strikeout, complete game effort improved her season record to 4-5.

In game two, Valdosta State opened up the scoring right away in the top half of the first inning. Collins continued her .500 day with a one out single and advanced to second on a walk byKiley Rusen. In the ensuing at bat, Karson King walked to load the bases, and Altman followed with a come backer that deflected off the pitcher, allowing the second baseman to make a play at first as Collins scored from third for the Blazers first run.

The Blazers teamed up for an offensive onslaught throughout the rest of game two, scoring runs in four of the next six innings, with the biggest number coming in the top half of the final inning, as the Blazers scored four runs to break out to a 10-2 lead.

The final push for Valdosta State featured a seventh inning in which five Blazers reached safely. The big blow in the frame came from Altman, who lifted a long ball over the right center field wall with two aboard. The homer for the Blazer shortstop was her third of the day and accounted for three of the four runs scored in the half inning.

The Argonauts responded with four runs of their own in the bottom of the seventh, but the deficit proved to be too much to overcome, as the Blazers held on for the four run win.

Maci Fletcher‘s complete game effort gave the freshman her second win of the year to improve her record to 2-0 on the season.