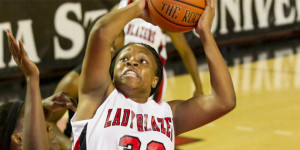 VALDOSTA, GA – The Valdosta State women’s basketball team fell just short of a come from behind victory on Thursday night at The Complex, as North Alabama held off the Lady Blazers to claim a 76-68 in Gulf South Conference action.

The loss moved the Lady Blazers to .500 on the season with a 10-10 record and dropped the squad to 5-9 in GSC play. The win for the Lions improved their record to 13-8 overall, 8-7 against league opponents.

The Lady Blazers struggled early with a stretch of 2-for-12 shooting from the floor during the first nine minutes of the contest that, when paired up with a plethora of three point shots for the Lions, resulted in a 20-5 deficit.

At the 11:00 minute mark, however, the Lady Blazers came alive from the field with a 10-16 shooting performance to close out the first period.

Lady Blazer forward Amy Duke fueled the offensive surge with an array of shots from both inside and outside of the perimeter for ten points in the first half alone. Duke’s three ball from deep in the corner during the final seconds of the first period capped off the half and cut the Lions’ lead to only six at 34-28.

Valdosta State stayed within striking distance during the second half and even pulled to within four points three different times during the final two minutes, but timely three point shooting throughout the period and strong free throw shooting late kept VSU at bay and prevented a Lady Blazer comeback.

North Alabama’s most effective weapon during the final minutes of the contest was efficiency from the charity stripe. Throughout the final 2:58 of the game, the Lions scored 12 points, ten of which came from a 10-for-10 shooting stretch from the free throw line.

The Lions finished the contest with an 87 percent shooting effort from the free throw line, as the team hit 20 out of 23 attempts from the foul line. In contrast, the Lady Blazers shot just 54.5 percent from the line with a 12-for-22 effort.

Duke led all VSU scorers for the second straight game with 18 points. The junior shot 7-for-12 from the field and 1-for-2 from the three point line while connecting on three of her five free throw attempts.

For the Lions, Jennifer Towne and Delisa Madry connected for 21 and 22 points, respectively, while Nichelle Fillmore chipped in with 16.

GSC women’s basketball action continues at The Complex on Saturday night against the visiting Union Lady Bulldogs. The contest is slated for a 6:00 p.m. start and can be followed via live stats, audio, and webcast, all of which will be available at www.vstateblazers.com.