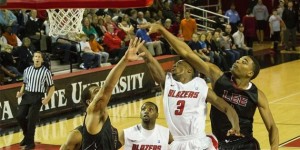 The game opens a stretch of four home contests in five games that the Blazers will play at home. VSU, which is currently 9-1 at home this season, will look to use the stretch to gain momentum for the upcoming Gulf South Conference Tournament, which begins March 7 in Birmingham, Ala.

The Blazers are currently 12-7 on the season and are looking to snap a two-game losing streak as they have fallen to 6-7 in GSC play. VSU is averaging 78.5 points per game and out-scores foes by 3.0 points per contest. The Blazers are shooting 42.6 percent from the floor, although that number rises to 45.9 percent in its home games, and continues to take care of the ball as Valdosta State has committed just 97 turnovers in its last 11 contests.

Under long-time head coach Bobby Champagne, North Alabama are 14-8 on the season, including an 8-6 record in Gulf South Conference play.
A balanced squad, UNA currently has four players averaging double figures in points while three have tallied at least 46 assists, led by senior guard Rashaun Claiborne. Claiborne currently averages 17.2 points and 7.1 rebounds a game and has dished out 46 assists to go along with 43 steals on the season. Senior forward Bruce Adams adds 13.0 points and 6.2 rebounds a game off the bench while junior guard Nathan Spehr scores 11.5 points a game and has dished out 69 assists. Meanwhile, junior forward Calvin Dade contributes 11.0 points and 5.9 rebounds per contest.

UNA is the top offensive team in the GSC as it averages 86.6 points a game and shoots 43.8 percent from the field. The Lions are also first in the league in rebounds at 42.2 per contest and hold opponents to just 42.9 percent shooting. North Alabama’s pressure defense has recorded 192 steals on the season.