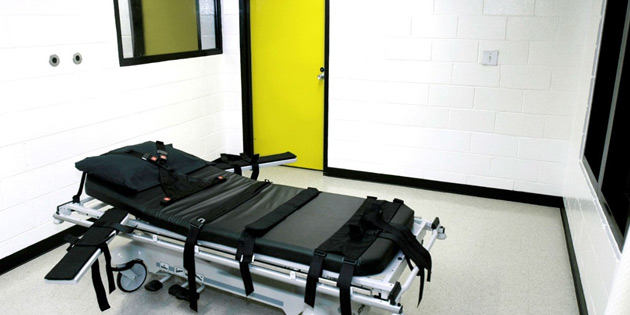 ATLANTA — In a story of marriage, divorce, marriage and murder that lead to the murder of her husband by another man, Kelly Renee Gissendaner is scheduled to be executed next week in Georgia.

The announcement came from Georgia Attorney General Sam Olens’ office.  Gissendaner will be executed on Wednesday, February 25, 2015, at 7:00 p.m. for the 1997 murder of her husband, Douglas Gissendaner.

Gissendaner was able to coerce and lead her boyfriend, Gregory Owen, into a scheme to kill her husband and leave him in a remote area.  She also instructed Owen to burn their car as part of the scheme.

Gissendaner and Douglas started seeing each other again in February 1995, remarried in May 1995, and separated in September 1995. Douglas again filed for divorce, but he later dropped the suit, as he and Gissendaner started dating again in May 1996. The couple moved to Auburn, Ga., in December 1996 and purchased a home together.

On Nov. 8, 1996, Pamela Kogut, a friend of Gissendaner’s, drove Gissendaner to a hotel in Winder, Ga., where Gissendaner spent the night with co-defendant Owen. In December, when co-defendant Owen’s sister asked Gissendaner what her intentions were with her brother, Gissendaner replied that she was only staying with Douglas to use his credit and money to purchase a house and then she would get rid of him. However, Gissendaner was telling others and giving all outward appearances that her marriage had taken a turn for the better.

On Feb. 7, 1997, Gissendaner picked co-defendant Owen up at his home and drove him to her house at approximately 5:30 p.m. or 6:00 p.m. Gissendaner changed clothing, gave co-defendant Owen a night stick and a six to eight inch hunting knife and left. Gissendaner spent the evening with Pamela Kogut, Kerri Otis, and Nicole Bennett, eventually going dancing at “The Shack” at 10:30 p.m. Ms. Otis had attempted to reschedule the evening, but Gissendaner insisted that they had to go out that night. The group left at 11:30 p.m. when Gissendaner stated that she had a bad feeling and had to go home.

In the meantime, Douglas had spent the evening at the home of Tom and Kathy Nesbit, friends of the family from church. Douglas worked on cars with Tom from 6:00 to 10:00 p.m. When Douglas left, he stated he was going straight home. Douglas arrived home at approximately 11:30 p.m. Co-defendant Owen was waiting for him inside the house. As Douglas was closing the door, co-defendant Owen walked up behind him, put a knife to his neck, and told him that he needed to go for a ride. The two got into Douglas’ car, and co-defendant Owen, with the knife in his lap, made Douglas drive in the direction of Luke Edwards Road in Gwinnett County, Ga.

After Gissendaner dropped off co-defendant Owen, co-defendant Owen put his clothes, the knife, the stick, and Douglas’ jewelry into a garbage bag and disposed of them one to two nights later.

Between 7:00 a.m. and 7:30 a.m. on the morning of the murder, Gissendaner phoned Douglas’ parents, the Nesbits, and Pamela Kogut, purportedly looking for Douglas. All testified that Gissendaner sounded strangely calm and unemotional. Gissendaner told people that she had come home at approximately midnight, mistakenly taken a sleeping pill rather than a pain pill and gone to sleep. Family, friends and the police were soon searching for signs of Douglas. The Department of Natural Resources found Douglas’ burned car on Sunday morning, but could not find Douglas’ body. Gissendaner acted surprised for about 15 minutes, and then did not seem to be distraught at all. When Gissendaner went to the scene of the burned car, she showed no emotion.

Douglas Gissendaner’s body was finally located on Feb. 20, 1996, approximately one mile from his car, 100 to 150 feet off the road, on his knees, face down. Douglas had received at least four stab wounds in the back of the head and the neck region. The cause of death was the stab wounds to the neck. However, the fatal wound could not be determined with 100 percent certainty because the right side of the victim’s neck, including the skin and much of the soft tissues, had been devoured by animals after death.

Co-defendant Owen initially denied any involvement in the murder, but confessed on Feb. 24, 1997, and implicated Gissendaner. Gissendaner was arrested for murder on Feb. 25, 1997. That day, Gissendaner called Pamela Kogut, saying “I did it.” However, Gissendaner also told her that co-defendant Owen held a knife to her and said he would kill her and the children if she told anybody about it.

While in jail awaiting trial, Gissendaner shared a jail cell for a short period of time with Laura McDuffie. Gissendaner got angry and hostile when she heard that co-defendant Owen was to be sentenced to 25 years in prison for his role in the murder. At that point, Gissendaner began writing letters to hire a third person who would falsely confess to holding Gissendaner at gunpoint and making her go to the crime scene on the night of the murder. Gissendaner asked Ms. McDuffie to help her find that third party person and said she was willing to pay $10,000. Ms. McDuffie turned these letters, which also contained names of people that Gissendaner wanted beaten up, over to her lawyer because she did not want to get involved in a murder case.

Georgia News Network’s John Clark will have a report from Jackson, the site of the execution, later this month.