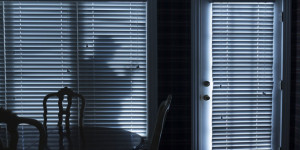 CONYERS, GA – A mother in Rockdale County has been accused by police of sending her child through a doggie door to steal from a neighbor’s home.

The victim noticed several items from her home had gone missing over the past few months, including a handgun. She then installed a security camera that sent the pictures to her email account. After a late November break-in, the victim received pictures of the neighbor’s child crawling through the doggie door and unlocking the door. The video also showed the mother entering the house through the unlocked door.