Photos and Story by Robin Postell

ADEL – Georgia Secretary of State and candidate for Governor Brian Kemp made a right turn off Highway 41 onto James Street Wednesday, October 3, only about 10 minutes late. On an aggressive “Putting Georgians First”-themed 27-county bus tour, his “KEMP” emblazoned ride tooted its bass-y horn as it approached a fawning crowd of supporters on the Cook Medical Center lawn across the street from Memorial Hospital of Adel. 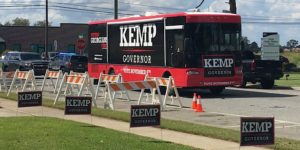 Adel Mayor Buddy Duke was there to greet him, “Hey,  Mayor,” shaking his hand, then adding, “Didn’t I meet you at a fish fry?” Duke confirmed this former introduction. 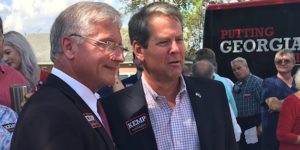 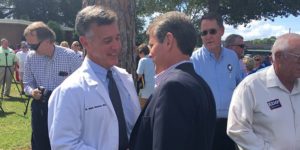 Kemp has made the effort to visit all 159 counties in Georgia and asserts his support of the working man. Stops like the one in Adel today are making him friends in a vastly red voter base and he wasted no time today appealing to them as soon as he took the stage – a short trailer gussied up with bales of hay, pots of bright yellow flowers and KEMP for Governor signs. 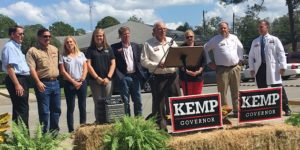 At 2:18 p.m. the first “Presidential Alert” sounded on everyone’s phone in attendance, at exactly the moment U.S. Representative Austin Scott took the podium to introduce Kemp.

Kemp, looking a bit road weary, braved the squelching Georgia October heat and thanked everyone for coming out. “As you know, I am no stranger to Cook County. I’ve met with election officials, chamber leaders and voters.”

Kemp jumped immediately into the issue of healthcare, saying, “All Georgians, no matter what zip code, need affordable health costs,” citing “rapidly decaying infrastructures” as one of the daunting obstacles to that ultimate goal. After referring to his opponent, Stacy Abrams, as a “radical”, he addressed the pressing issues that Abrams campaign has also tackled, like the absence of primary care and obstetric physicians in some Georgia counties.

“I will put patients – not the status quo – first,” adding that “the solution to the healthcare cost problem is not more government programs.”

“I have a better plan, a patient-centered program…that will favor Georgia, not California,” Kemp said, expanding with plans to “spur innovations” with “small group exchange markets”. Kemp recoils at the notion of Medicaid expansion, and stated he would reduce costs and provide coverage for those with pre-existing conditions.

Kemp noted pans to empower the private sector, grow telemedicine, and increase the Rural Hospital tax credit from the current $60 million to $100 million.

Kemp closed his brief speech by underscoring his mental health initiative, which will include a commission devoted to behavioral health, to combat drug abuse and PTSD among veterans.

“A government-run, single-payer health care system will cost billions a year,” Kemp said, adding the warning that you would lose your doctor.

“Innovation and market-based solutions,” Kemp said, “Are what is needed. Vote for me. I humbly ask for your vote.  Thank you for braving this heat to come out and see me.”

Kemp continues on his bus tour, heading to Tift and Clinch Counties after pulling out of Cook. The tour began on Monday, October 1 and will wrap on Friday, October 5 in Hart County.