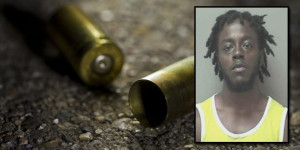 THOMASVILLE, GA – The Thomasville Police Department has made an arrest in the shooting incident that left one man hospitalized on Tuesday night.

Police taped off North Broad Street in Thomasville on Tuesday night as they investigated the shooting of 35 year old Anthony Adams. Adams was shot once in the chin and also in the leg.

Around 10:30 Tuesday night officers and EMS responded to a call in reference to man being found shot in the street near the United Methodist Church, and The Department of Labor building on Broad. A witness heard Adams’ calling for help, according to the report.

Investigators had enough evidence within a few hours to arrest Tyree Rashan Jones. Police do believe Jones and Adams are familiar with each other, but the motive of the crime is still unclear. Jones, 19, is in jail and facing the following charges; aggravated battery, and possession of a firearm during the commission of a crime.

Investigators are questioning individuals and still trying to determine what exactly prompted the shooting.