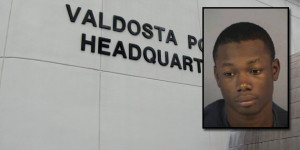 VALDOSTA, GA – The Valdosta Police Department has identified the suspect in a stabbing that occurred on March 13 at the 300 block of Lee Street.

Detectives with the Valdosta Police Department have identified Jahmal McGee, 20, as the offender in the stabbing and robbery of Leon Mitchell. Arrest warrants have been obtained on McGee for aggravated assault, aggravated battery, armed robbery, and possession of a knife during the commission of a crime.

The police department is asking anyone with information about McGee’s location to contact law enforcement at 229-293-3145 or can remain anonymous at 229-293-3091.

On March 13, 2014 at approximately 5:20 am, the Valdosta Police Department responded to the 300 block of Lee Street Lane in reference to a person who had been stabbed multiple times. Officer arrived and located Leon Mitchell who had multiple stab wounds to his back. Mitchell was transported by EMS to the SGMC ER. Detectives from the Valdosta Police Department and a Crime Scene Technician from the Valdosta-Lowndes Regional Crime Laboratory responded to investigate the incident. Mitchell underwent surgery and is listed in serious condition.