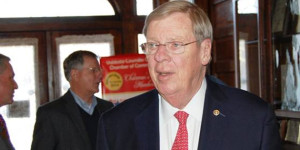 VALDOSTA, GA – U.S. Senator Johnny Isakson met with business leaders and members of the South Georgia Military Affairs Council on Friday afternoon at the Chamber to discuss the U.S. Department of Defense’s recently proposed budget and the situation its implementation would create for Moody AFB’s A-10 mission.

Despite the looming threat of a BRAC in 2016 or 2017, Senator Isakson stated that Moody has a great advantage in having the support of Valdosta-Lowndes and the surrounding communities. Isakson also acknowledged the advantage of having local support of a sufficient Military Activity Zone around the base and being prepared to take on missions involving noisy aircraft. These factors, in conjunction with Moody’s rescue mission are some of the base’s most appealing assets. Also to be counted among appealing attributes are Moody’s proximity to the interstate and to the east coast ports.

Sen. Isakson voiced his understanding of how crucial Moody is to Valdosta-Lowndes and the surrounding communities. Local leaders were commended for efforts to sustain the base with acknowledgement that leaders in Washington D.C. are familiar with area support for Moody. Prior to meeting at the Chamber, Isakson met with Secretary of the Air Force, Deborah James, U.S. Senator Saxby Chambliss, and U.S. Representative Austin Scott at Moody AFB to discuss the A-10 mission with base leadership. He verified having heard accounts from airmen on base in support of keeping the A-10, quoting them as saying, “There is no other aircraft that can do for us what the A-10 can do.”

Other discussion included Sen. Isakson’s praise for the recently passed Farm Bill and the current battle on energy regulations. Isakson voiced his favor of nuclear energy programs which would lower carbon output, and also shared his support for the Keystone XL Pipeline, reporting that it would bring about new jobs and confirm American control over our energy resources.