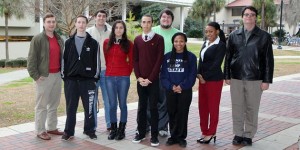 “I might also add that because of this tournament,” shared Kevin Bryant, assistant coach who accompanied the team Knoxville, Tenn., “VSU skyrocketed to 13th in the nation for NPDA rankings

The VSU Forensics (Speech and Debate) Team will next travel to San Diego, Calif., on Thursday, Feb. 6, to compete in the Sunset Cliffs Classic, hosted by Point Loma Nazarene University.

“This is a round-robin style tournament where only one team from the top 16 programs in the nation can compete against each other after successfully submitting a bid for competition,” said Bryant. “Never before has VSU been accepted to any round-robin tournaments. … we hope to represent both VSU and the Southeastern circuit well. Wish us luck!”

The VSU Forensics (Speech and Debate) Team is open to all majors on campus and does not require previous experience, Eaves noted. The team competes in regional and national level competitions and participates in parliamentary debate as well as individual events, such as impromptu speaking, extemporaneous speaking, informative speaking, persuasion, dramatic interpretation, dramatic duo, poetry interpretation, and more.