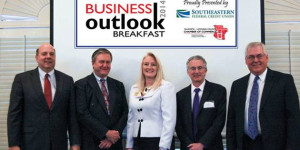 Dr. Tom Cunningham, Vice President and Associate Director of Research for the Federal Reserve Bank of Atlanta, provided a business outlook from a national and regional perspective.He serves on the Atlanta Fed’s Information Technology and Risk Management committees and is a member of the Federal Reserve System’s Information Security Group and Technology Services Council. He is currently the acting director of the Atlanta Fed’s Center for Real Estate Analytics.

Dr. Cunningham predicts little to no movement in monetary accommodation and fewer negative economical issues. He expects a 1% drop in unemployment while also contributing credit to retirees and disabled citizens leaving the labor market. Others leave the labor force to return to school in order to then re-enter the labor force upon economic improvement.

Large concerns include government spending, policy uncertainty, government shutdowns, the current healthcare issues, and an increase in regulations. Still, improvement is expected in 2014 but by a small margin.

The Federal Reserve plans to make great efforts to see change in a “real time” perspective, and tracks the forecast in comparison to the changes seen on the ground.

Dr. Jeffrey Humphreys, Director of the Selig Center for Economic Growth at the University of Georgia’s Terry College of Business, provided the Georgia economic outlook. Predicting a 3.3% growth of GDP and a faster growth than in 2013, his outlook for 2014 is comfortable. With a 2.2% job growth in Georgia, compared to 1.7% in the nation, Dr. Humphreys expectsGeorgia to outperform the country, leading to a major shift in economic development strategy. Also on the incline to stability is the recovery of the housing market. Leading industries, he suggests, will include construction, mining, logging, and manufacturing.

Potential problems in 2014 include changes in policy for the Federal Reserve and the lack of an established federal budget. Georgia currently ranks 40th in per capita personal income compared to 25th in 1996. Among other concerns, federal spending cuts are expected to affect Georgia with regards to the Department of Defense.

Dr. Humphreys is a member of the Governor’s Council of Economic Advisors and is a monthly columnist for Georgia Trend Magazine

Dr. Cynthia Tori, Professor of Economics at the Harley Langdale Jr. College of Business at Valdosta State University, provided the local forecast. She listed the agricultural industry as a bright spot in South Georgia and indicated the market as one of the area’s strongest. Moody AFB, South Georgia Medical Center, and Valdosta State University were listed among the top ten employers in the area. Dr. Tori acknowledged that the business community will need to pay close attention to the defense budget due to a high probability of cuts that could trigger a BRAC. In contrast, state funding for education is on the rise, but still doesn’t meet the growing demand. The city’s housing market has trended toward stable for the past few years, providing hope for the real estate market.

One of the major threats Valdosta faces is the lack of new jobs available to the workforce. Similarly, stagnant wages have a crippling affect on industry. Government wages, for example, have been frozen since 2007. Low state revenue and high federal fiscal spending are also strong threats to the local economy. Overall, the economic growth expected is modest, with 2014 looking very similar to 2013.

Acknowledging the reality of growing issues, Dr. Tori pointed out that Valdosta is currently ranked as the third lowest Metropolitan Statistical Area in the United States. She called leaders to action, addressing the need for critical thinking and problem solving skills to be brought to the decision making table. “We can sit here and wait to see how things are going to happen, or we can take a proactive approach,” she said, focusing on the need to create a strategic plan to grow existing businesses and bring new businesses to the area.

Dr. Tori has been published in the Journal of Macroeconomics, the Atlantic Economic Journal, and the International Journal of Economics and Finance.  Dr. Tori is also the writer and editor of the South Georgia Business Outlook, which discusses and forecasts the expected economic conditions for the 32 counties that comprise the South Georgia region.